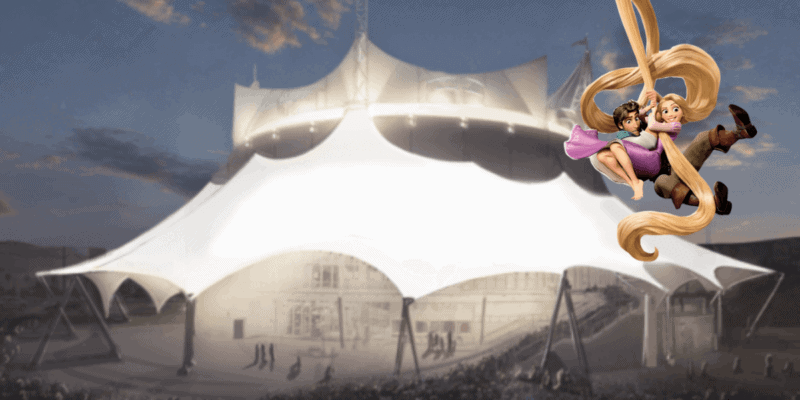 More news has emerged from the realm of Disney World’s latest Cirque du Soleil project. Just one month after Orange County received a notice of commencement from Disney, signally that the resort was ready to begin “rehab” work on its theater in Disney Springs, we at Inside the Magic have now learned that workers and supplies will soon arrive on-scene.

According to the  latest permit filed to Orange County, the “Notice of Commencement” identifies that they intend to “provide labor, material and/or electrical for construction.” We know that this is intended for the now-empty and closed Cirque du Soleil theater in the area of Disney Springs known as the West Side due to the actual street address provided.

This notice of commencement, filed by Lake Buena Vista Construction, follows the one filed by Walt Disney Imagineering in September with the rather-surprisingly direct title, “Cirque du Soleil Rehab.” While there is no written statement connecting the two permits, a clear connection is suggested and the actual work on the Disney Springs landmark will finally begin.

While we do not know the scale of the “rehab” that is to occur, it is likely being done in preparation for the latest show scheduled to fill the space, Drawn to Life.

Set to debut in February 2021, Drawn to Life replaces the original show, La Nouba, and is the first collaborative effort between Disney Imagineers and animators, and Cirque du Soleil.

Disney Parks describes the show as the following:

“Our main character is Julie, a courageous and determined young girl. Her father, Tom, was a Disney animator who raised his daughter and surrounded her with Disney animated characters who helped her grow and played important roles in her life.

When Julie finds an unfinished animation piece and a letter from her late father, her imagination is awakened, and she embarks on an inspiring journey into the whimsical world of animation. Along the way, she meets characters like Mr. Pencil (her father’s favorite pencil), who help guide her. Julie also encounters Miss Hésitation, the story’s villain, who reflects Julie’s own doubts and fears as an artist.

Throughout her adventure, Julie is reunited with Disney characters from her childhood, giving her the encouragement she needs to animate with her own unique artistic voice.”

If you are planning a trip back to the Walt Disney World Resort and want to add experiences like “Drawn to Life” to your itinerary, our friends at Academy Travel are standing by to provide expert guidance and help make this Disney World Vacation as magical as possible. Click here to learn more and receive your free, no-obligation quote today!