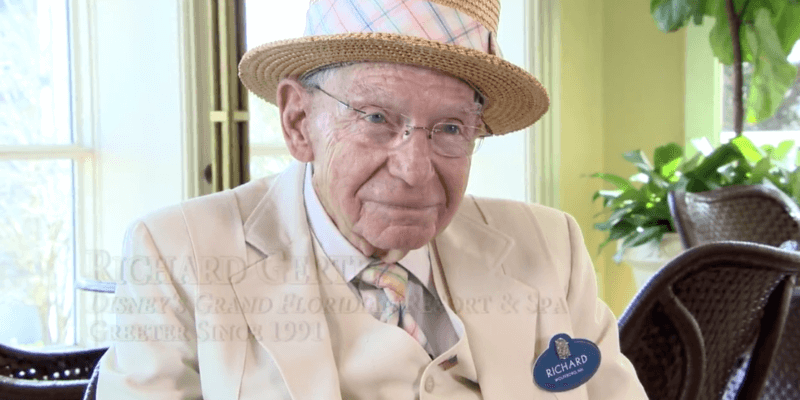 Richard Gerth, who was known for greeting guests at Disney’s Grand Floridian Resort in Orlando, Florida, passed away at 92 years old in 2018.

Richard was adored and loved by so many Guests and in 2013, he was honored as a recipient of The Walt Disney Legacy Award — the highest honor a Cast Member can achieve at the Disney Parks and Resorts.

And now, even 2 years after the passing of Richard Gerth, fans are still signing the petition, which was first created when the unfortunate news broke. It’s safe to say, Mr. Gerth touched so many from around the world and continues to touch individuals as they continue to share their thoughts and prayers by signing the petition.

Richard Gerth, the famous Disney cast member at the Grand Floridian, passed away June 6th, at the age of 92.

He had been greeting guests at the beautiful Victorian resort since 1991, and assisted over 3,000 brides-to-be. For over 30 years, Richard would welcome guests to the Grand Floridian. Hhe became a fixture there, and, for some, as much of an important stop as Cinderella Castle or it’s a small world.

In 2013, Richard was presented with the Walt Disney Legacy Award, which is the highest honor any Disney cast member can receive.

He once said, “Your whole life is built on how you act to other people. I’m overjoyed every time I come here (the Grand).”

I can think of no better tribute to this man than to honor him with a statue at the resort where he welcomed millions of families in his tenure at the place where dreams come true!

Before Richard passed, he had the opportunity to sit down with Disney Vacation Club to discuss his work at Disney’s Grand Floridian Resort and Spa in Orlando, Florida. Check it out here:

Related: Disney’s Grand Floridian to get a walkway to Magic Kingdom

Our thoughts and prayers continue to go out to the Gerth family.