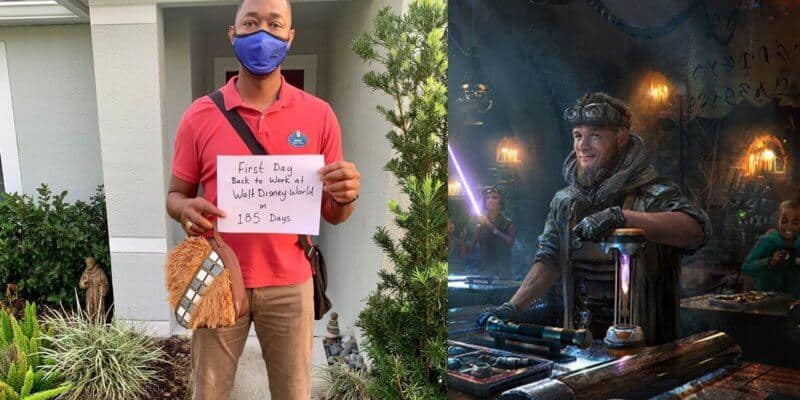 When Walt Disney World opened back up in July, it was missing a few things. It didn’t have fireworks, shows, or parades, but it was also missing one of the most magical parts: its performers.

When you go to Disney, the setting is one level of immersion, but we believe the magic because we see the Cast Members make it. And Cast Members were doing a great job during the reopening, but we were missing the performances from Disney characters that really pulled us into Walt’s world.

On August 19th, Disney and the Actors’ Equity Associate reached an agreement to bring back performers to the park. Although many of our favorite ‘friends’ remain furloughed for the time being, some are headed back to work!

Today, Mark got to go back to making magic after 185 days!

Mark seems to be good friends with Kembe, one of The Gathers at Savi’s Workshop in Star Wars: Galaxy’s Edge, at Disney’s Hollywood Studios. Kembe leads Guests as they create their own lightsabers, and with Savi’s Workshop making its return to Disney on September 20th, Kembe is as well!

Mark has also had a hand in Indiana Jones™ Epic Stunt Spectacular!, Lights, Motors, Action!, and more. He has been a Cast Member for over 25 years, making magic daily.

Plus, we love how Mark’s return to Disney World photo is just like a “first day of school” photo!

The best thing from Mark’s Tweet was the love it garnished instantly.

“Mark I am so happy for you, and selfishly happy to have you back in WDW again. Thank you for your dedication! MTFBWY”

“Congratulations & Welcome back to the magic Mark!!”

“Alright! Have a busy & wonderful day and don’t forget to stretch! :)”

After being away from the magic for so long, it’s heartwarming to see how happy both Cast Members are to return as well as how excited Guests are that they are back!

You may recognize Mark as one of the hosts on the Disney Parks Blog livestreams, or his Youtube channel!

To all the performers heading back to Walt Disney World, all of us at ITM are glad you are returning, and cannot wait for all to come back!