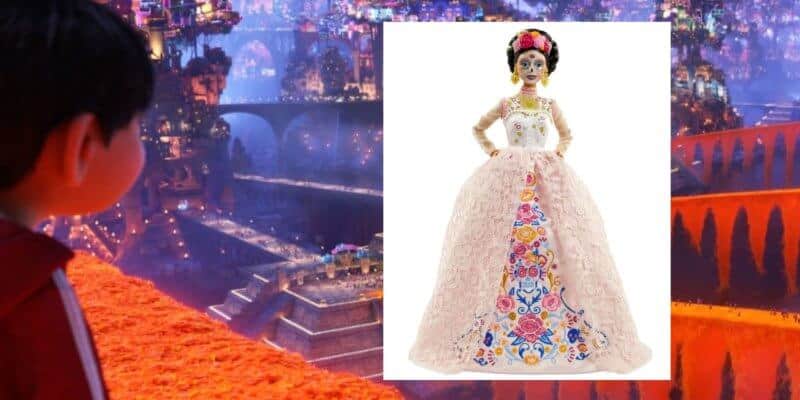 Is it meant to be Coco affiliated?

Not necessarily, but with the “light, blush-colored lace dress over a layer embroidered with floral and skeleton accents. The intricacy of the makeup has been taken up a notch, and the “golden highlights in her hair shimmer beneath a crown of skeleton hands holding roses and marigolds,” it all fits perfectly with the characters in the film.

The hit Pixar film Coco takes place place during Dia de Muertos which makes the doll fit in very perfectly with the film. Check out the characters, and then look at the latest Barbie doll. Is it not screaming Coco to you too?!

Where to buy the new Barbie

You can pre-order the Barbie Dia de Muertos doll for 2020 is here at Entertainment Earth for $75.99 with shipment ready for October. Last year’s doll sold out in minutes with sky-high resale prices on eBay, so if you want to get this Barbie – jump on it right away. Note that the doll will come with a Certificate of Authenticity.

With Coco taking over the Mexican pavilion at Epcot in the near future, Coco merchandise is starting to show up EVERYWHERE and we are here for it! There was recently a new Coco Loungefly that was released that gave us the fall vibes we were craving leading up the the Halloween season. Or perhaps you love the film and want a giant Coco inflatable? We found that at Home Depot as well! Leading into the spooky season we are very excited to see if Disney begins to release more Coco inspired merchandise.

So what do you think? Would you buy this new Dia de Muertos Barbie? Let us know!

Comments Off on Love ‘Coco’? Check Out This Dia de Los Muertos Barbie!