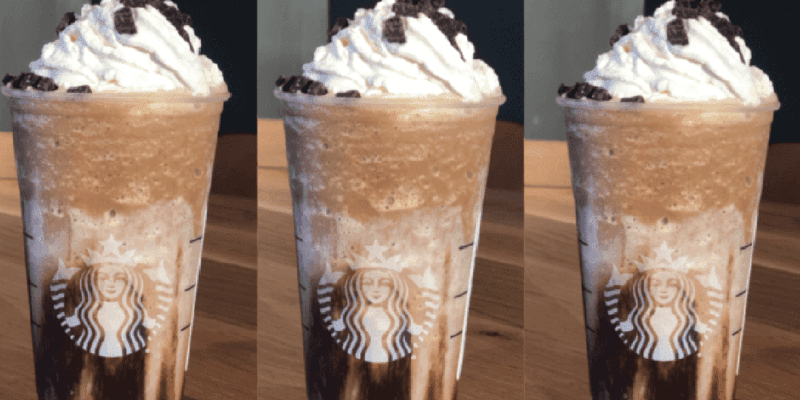 This is Halloween! Everybody make a scene about this new secret Starbucks menu item: the Jack Skellington Frappuccino. Starbucks offers so many amazing fall drinks for the season, but this one has a certain amount of magic. Whether you love fall, Disney, or just some delicious chocolaty pumpkin goodness, this drink is for you. So, don’t ask Oogie Boogie for the recipe! We’ve got you covered for your order. All hail the Pumpkin King!

How to Order A Jack Skellington Frappuccino

No need to lament! Thanks to Taste of Home, we can tell you how to order this Starbucks secret menu item. First, ask for a Venti Pumpkin Spice Frappuccino. Next, request both a shot of espresso and a shot of chai. After your barista blends this fall masterpiece, add a mocha drizzle to ooze down the inside of the cup. Top off your sweet drink with some whipped cream and java chips! For it is plain as anyone could see, this frappuccino is simply meant to be yours this fall season. But beware! Since the Pumpkin Spice Frappuccino is a seasonal drink, so is this spooky seasonal treat. Get your fall coffee fix before it’s the season of Sandy Claws!

It’s feeling like fall here finally in AZ so had to try out this secret frap: JACK SKELLINGTON FRAPPUCCINO??? How to order: -Pumpkin Spice Frappuccino -Chai syrup -Shot of espresso (for the coffee lovers) -Mocha drizzle on sides of cup -Whipped cream on top -Java chips • • • #starbucks #jackskellington #jackskellingtonfrappuccino #pumpkinking

As if this beverage does not have enough tricks for Lock, Shock, and Barrel, there’s always room for one more spook in Halloween Town. If you don’t already know, Disney park guests order their Starbucks treats inside Disney theme parks! At Walt Disney World, there is a Starbucks location in Magic Kingdom, Epcot, Disney’s Hollywood Studios, Disney’s Animal Kingdom, and Disney Springs. At Disneyland Resort, there are Starbucks locations in Disneyland and Disney’s California Adventure along with two locations in Downtown Disney.

Looking for other fall tricks and treats? Check out our Fall Treats Guide for Walt Disney World. Walt Disney World has some favorites returning to their Disney parks along with some new treats to snack on. There are other Nightmare Before Christmas themed snacks in Walt Disney World parks. The best thing about this Jack Skellington Frappuccino is that it can be ordered inside a Disney theme park or at a Starbucks location near you.

Does this pumpkin and chocolate Frappuccino have enough spooks for you? Let us know if you’ve ordered this drink (or will during this spooky season) in the comments!