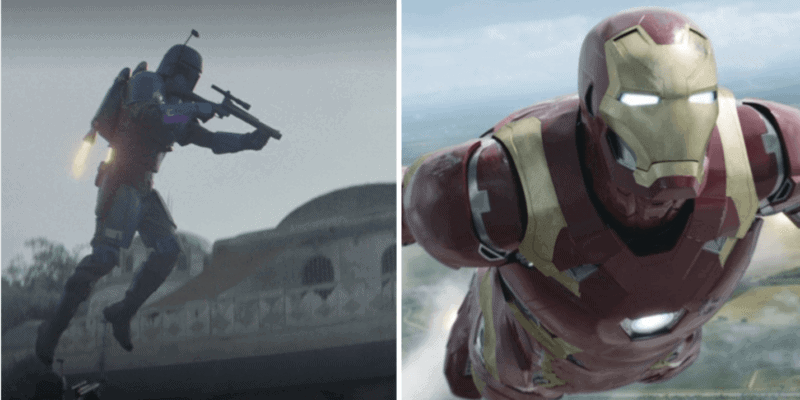 Even though Iron Man has officially exited the Marvel Cinematic Universe, it appears that he may still be present in Los Angeles. Scott Gustin shared this intriguing Tweet about a man in a jetpack last night.

The FBI has launched an investigation after an American Airlines pilot said he saw what appeared to be a man flying with a jet pack Sunday night near Los Angeles International Airport.

The FBI has launched an investigation after an American Airlines pilot said he saw what appeared to be a man flying with a jet pack Sunday night near Los Angeles International Airport. I’m sorry… what now?

In the comments on Gustin’s social media post about the supposed LAX jetpack flyer, Marvel and Star Wars fans were having a field day. Many of his followers asserted that it had to be Iron Man or The Mandalorian/Din Djarin soaring through the California sky.

Someone gets Rhodes on the phone and tell him to control his boy.

While another user, @DanathanBayer, responded with a “Yes, this is – this is Tony Stark” GIF.

Twitter user @HeatherW25 thought it might a publicity stunt for Season 2 of The Mandalorian, premiering on Disney+ in October. She wrote:

Sounds like the second season of the mandalorian [sic]

What really happened at LAX?

All Marvel and Star Wars jokes aside, the jetpack situation at LAX is being taken seriously by local and federal authorities. According to a Newsweek article about the bizarre occurrence:

In a statement to Newsweek, the Federal Aviation Administration (FAA) confirmed: “Two airline flight crews reported seeing what appeared to be someone in a jetpack as they were on their final approaches to LAX around 6:35 p.m. PDT Sunday. The FAA alerted local law enforcement to the reports and is looking into these reports.”

The FBI has also been tapped to work on the investigation into the strange, Twilight Zone-esque sighting.

What do you think about the jetpack sighting at LAX? Is your money on Iron Man or The Mandalorian?

Comments Off on The Mandalorian or Iron Man Spotted at LAX? FBI Investigates