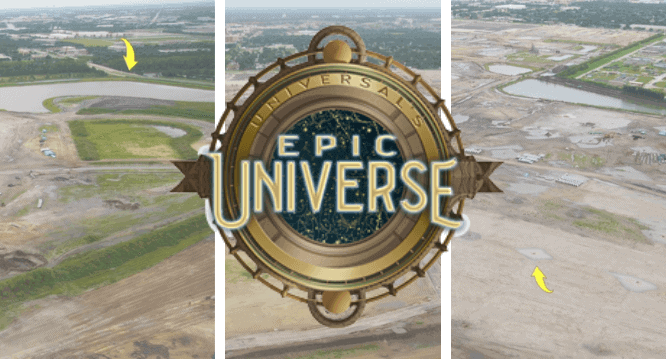 It’s been years since Walt Disney World announced or even opened a new theme park, and Orlando visitors are always looking for news about something new! When Universal Studios’ Epic Universe was announced, everyone was aflutter about possibilities, inclusions, new rides, and more. While the park’s construction was put on hold due to 2020’s many obstacles, it seems that @Bioreconstruct has some new peeks at what’s going on at the Epic Universe site. The land is moving!

In the age of modern construction, there’s a lot to do! Basework like piping, scaping, and terraforming are the first steps when creating something like a theme park. Just think about Magic Kingdom’s Utilidors or the flow of water into various drains. It’s more than meets the eye! While we wait for a new opening date (the original was 2023, and we’re not sure if that will keep), let’s look at aerial views of the Universal Studios’ Epic Universe construction.

Twitter user @Bioreconstruct has posted three aerial shots of the parking areas, borders surrounding the park and more. In this first photo, we’re getting a bird’s eye view in a wide shot. Take a look behind the red crane at the guest parking area (most likely a garage) and the yellow arrow looking at an access road that may lead to the park.

Aerial look at some of land in preparation for Universal’s Epic Universe. Guest parking at center, between access road and retention pond. Arrow points to Destination Pwy, which may become one of the roads guests use to access UEU. pic.twitter.com/FVcngRUibx

In this next photo, @Bioreconstruct shows us the possible northern border of the potential park, Sand Lake Road. Even google maps show some promising dirt when you google the “address!”

Aerial view of where a theme park is planned. Universal’s Epic Universe. Arrow points to Sand Lake Road, northern border of this block of land. pic.twitter.com/jCOBBaYZsx

Lastly, many theme park guests will first arrive at the parking area for Universal’s Epic Universe. This time, @Bioreconstruct’s arrow points to a drain in the future parking area. Looking closely, we can see three of them in this shot. Who knows how high this garage may be… we’re certain we want to visit during the opening weeks of this epic park!

Aerial look at much of the land for Universal’s Epic Universe. Arrow in section where flat lot guest parking is planned. Arrow also shows how land is already sloped for parking drainage. pic.twitter.com/ROJXyoBrq3

If you’re looking for more information about Universal’s next foray into theme parks and entertainment, take a look at these permits. While these permits are not for construction, they are instead meant to share intended locations for emergency vehicle routes, fire hydrants, and water pipes for the fire department. It’s part of the first steps to more fun as Epic Universe’s construction continues!

Leave us a comment about what you think Universal will be including in this exciting new park!