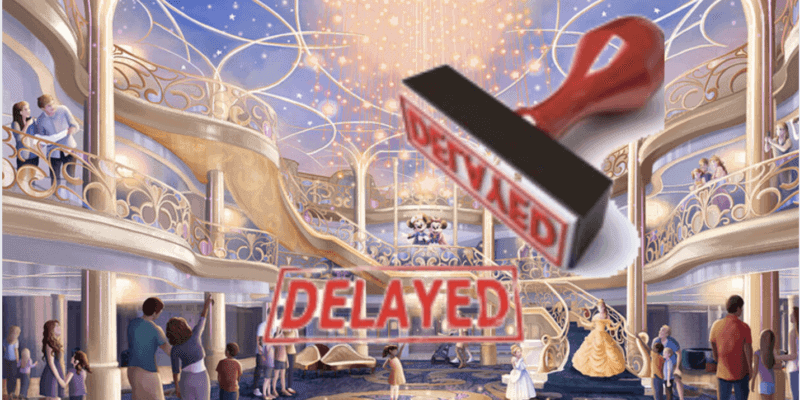 During an interview last week, McCarthy was asked about the status of the three new Disney Cruise Line ships slated for 2021-2023. She responded:

“The shipyard we utilize for our cruise ships, Meyer Werft, was impacted [by COVID] and we encountered a delay. We’re in negotiations and discussions with the shipyard to finalize dates, but as soon as we have those, we’ll make an announcement for when the fifth ship will be delivered. But it is delayed from what we originally anticipated.”

The Wish was originally scheduled to begin sailing in early 2022, although its itineraries are not yet known. In August we showcased construction progress on the Disney Wish in Germany and noted that the ship was likely to be delayed due to both pandemic-related closures and the CDC’s ‘No Sail Order.’

What do we know about the Disney Wish?

When Walt Disney Company executive Bob Chapek, who was then Chairman Parks, Experiences and Products, announced details regarding the Disney Wish at the 2019 D23 Expo, this description of the upcoming fifth Disney ship was released:

The ship’s atrium will be a bright, airy and elegant space inspired by the beauty of an enchanted fairytale. A beloved hallmark of Disney Cruise Line, it has been a tradition to adorn the back of our ships with an iconic character that reflects the theme of each vessel. For the Disney Wish, the ship’s stern will feature Rapunzel. Our favorite artsy princess, paintbrush in hand, uses her enchanted hair to suspend herself as she decorates the stern of the ship with the help of her feisty sidekick, Pascal. Spirited, smart, curious and above all, adventurous, Rapunzel embodies the wish and desire to see and experience the world.

If you would like to plan a 2021 Disney Cruise Line Vacation on any of the ships in the current fleet — the Disney Dream, the Disney Fantasy, the Disney Magic, or the Disney Wonder — contact the experts at Academy Travel for a free quote. Right now, who couldn’t use a Castaway Cay day in the Bahamas or a European adventure to look forward to?