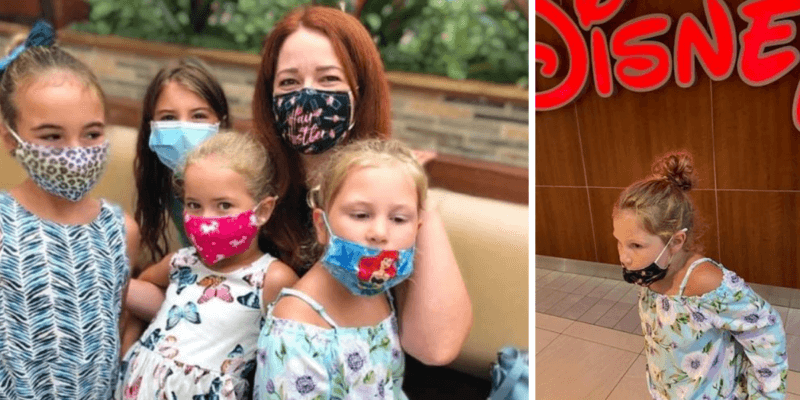 It’s clear that the Walt Disney Company is seriously enforcing the use of face coverings. Beyond just at the Disney Parks, Disney Stores across the globe are requiring face coverings for entry. And when Guests don’t abide, they are asked to leave.

As Disney Stores begin to reopen worldwide — in areas where they are able to operate during the pandemic — they are abiding by strict health and safety measures for the well-being of all Cast Members and Guests. Just like at Disney Parks around the world that have reopened within the past few months, it’s important for Guests at Disney Stores to abide by these safety measures, including the use of face coverings.

However, it is an adjustment to have to maintain social distancing and wear a face mask.

Recently, Sarah Baillargeon brought her children to visit a reopened Disney Store at a shopping center in London. During their visit, the family’s six-year-old daughter, Ruby, who is on the autism spectrum, was improperly wearing her face mask while inside the store.

Related: Tips for Visiting Disney Parks With Kids After Reopening

Below is an excerpt of the Baillargeon family’s story, as it was reported by London’s CTV News:

“We were wearing masks, myself, my mom, all the kids, so we said you know, ‘She’s autistic, she has a sensory issue, she may not keep it on,’ and what the women said to us was ‘OK, just try your best.’”

Baillargeon had difficulty keeping Ruby’s mask on, since Ruby does not like things touching her face. Ruby continued to fiddle with her mask and pull it under her nose.

The family says they were asked by three different staff members for Ruby to wear her mask properly.

After receiving several warnings about the six-year-old’s improper mask use, Baillargeon says that she was offered the option of a face shield for her child. However, Ruby does not like to wear anything on her face, so her mother said that the six-year-old would have difficulty keeping a shield on. At that point, the family was given five minutes to finish up and exit the store.

Read More: How To Wear a Face Mask at Walt Disney World: 5 Tips

The London news outlet also shared a response that they received from the Walt Disney Company regarding the incident:

A spokesperson responded Wednesday morning saying, “We are always focused on the health and safety of our Cast Members and Guests. At all of our Disney stores we have implemented a number of enhanced measures, including a face covering requirement. During these unprecedented times we all have a shared responsibility to do our part. We regret the family was disappointed.”

It’s important to note that Disney’s health and safety regulations at Disney Stores, Disney Parks, Disney Resorts, and other Disney properties are in place for the well-being of everyone during this pandemic. And Cast Members have been trained to enforce and abide by these protocols.

However, know that every person is different, so not every Disney Guest will have an easy time adjusting to the face coverings requirement, among the other extensive measures in place. We hope that the Baillargeon family is able to have a magical Disney visit in the future, and we understand that wearing face coverings at all times while at a Disney Store or theme park is not always comfortable for everyone.