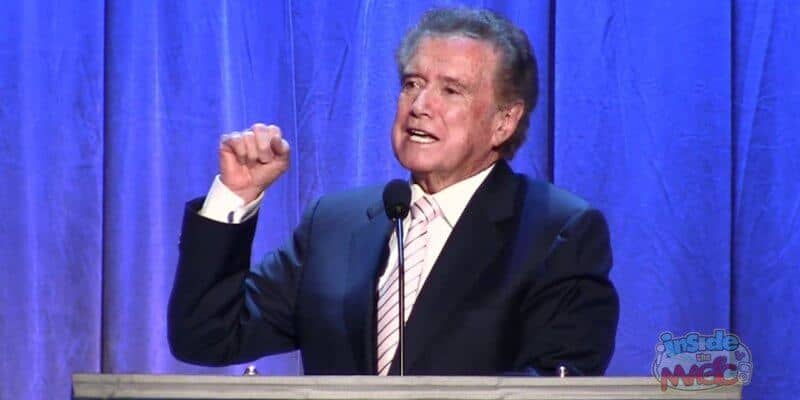 Television host and Disney Legend Regis Philbin has passed away at the age of 88.

PEOPLE reported on Saturday that the longtime television host dies on Friday, July 24, only one month before his 89th birthday. Philbin died of natural causes.

Philbin is known for his extensive television career. He began working on the ABC show Live! with Regis and Kathie Lee alongside Kathie Lee Gifford in 1988. 15 years later. Gifford left the ABC show, and Philbin’s new co-host was named: Kelly Ripa. Philbin left the show in 2011 after co-hosting it for 23 years.

Philbin also served as the original host of the ABC game show Who Wants to Be a Millionaire? for a few years, from 1999 to 2002.

Throughout his career, Philbin has achieved numerous accolades, including Daytime Emmy Awards for outstanding talk show host for Live! in 2001 and 2011, and outstanding game show host for Who Wants to Be a Millionaire. He received his Hollywood Walk of Fame in 2003 and a Lifetime Achievement Award from the Daytime Emmy Awards in 2008. And in 2011, Philbin was named a Disney Legend, the highest accolade that anyone can achieve at The Walt Disney Company (the parent company of ABC).

You can watch our video of Philbin accepting his Disney Legends award below:

An exclusive statement was sent to PEOPLE by the Philbin family:

“We are deeply saddened to share that our beloved Regis Philbin passed away last night of natural causes, one month shy of his 89th birthday,” his family shares with PEOPLE in an exclusive statement on Saturday.

“His family and friends are forever grateful for the time we got to spend with him – for his warmth, his legendary sense of humor, and his singular ability to make every day into something worth talking about. We thank his fans and admirers for their incredible support over his 60-year career and ask for privacy as we mourn his loss,” the Philbin family says.

D23 also shared an article announcing Philbin’s passing. The D23 post included sentiments from other celebrities and friends of Philbin, including Bob Iger.

“We are heartbroken to hear that a longtime colleague and friend, Regis Philbin, passed away at the age of 88,” said Disney Executive Chairman Bob Iger. “Regis graced us with warmth, humor, and self-deprecating wit, always bringing happiness to us all. Our hearts go out to Joy and to his family. Rest in Peace, Regis.”

Our hearts go out to the Philbin family, all of Regis’s loved ones and friends, and everyone to whom he spread joy.