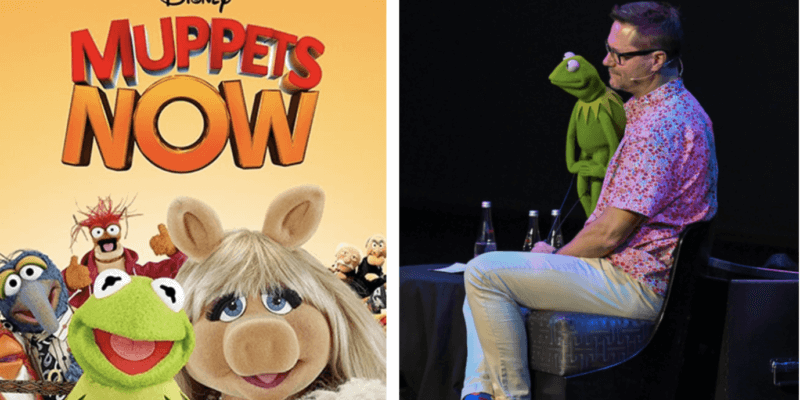 The Muppets are returning to television with the highly anticipated short-form television series Muppets Now on July 31, Disney has released footage of Kermit and his human performer Matt Vogel discussing the new Muppets show last October.

Thanks to live tight shots from our camera crew on screens flanking the stage, Members in attendance saw Muppets on Walt Disney Theatre screens just as they’d appear on TV or cinema screens, while simultaneously seeing their human Muppet performer working his magic on stage. It was like being on the set of an actual Muppets Studio production (if said production was in the middle of the ocean).

During Kermit’s guest appearance on the Disney Magic cruise, Muppets fans got the opportunity to see a sneak peek of Muppets Now. Now, the video is available to everyone.

March shared that he was even able to wheedle Kermit into filming this fun introduction for the unscripted series.

In the Summer 2020 issue of Disney twenty-three magazine, Disney shared additional details about how the improv Muppets series, which will feature a variety of surprising guest stars, will be structured:

An uproarious game show from everyone’s favorite shellfish, Pepé the King Prawn…a cooking show with none other than the Swedish Chef; a look at the trés fabulous lifestyle of the one and only Miss Piggy; some zany science experiments from Dr. Bunsen Honeydew and his every-faithful assistant, Beaker; and a chat show featuring several super-special celebrity guests.

Are you excited about this Muppets Now first look? Are you looking forward to the Muppets’ first original series on the Disney+ streaming platform?

Comments Off on First Look at ‘Muppets Now’ With Kermit!