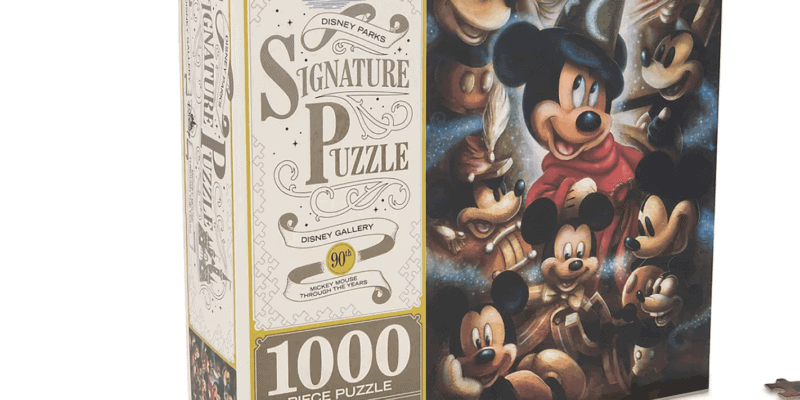 If your family is like most, you’re spending extra time at home this summer even if you aren’t officially in quarantine anymore. One of the best ways to keep busy and add some Disney magic to your everyday routine is to do a Disney puzzle!

This is also a great activity for the entire family to enjoy. Even small children can help their parents and older siblings do puzzles that feature their favorite Disney characters.

The Disney Signature Puzzle series offers gorgeous images that are sure to be a hit with all ages. Yesterday, the Disney Springs social media team encouraged shoppers to stop by Walt Disney World Resort’s World of Disney store to buy a Disney Parks Signature Puzzle.

Fortunately, you don’t have to be onsite at Disney World to purchase a jigsaw puzzle from this stunning Disney collection. Three options, including the Mickey version featured on Disney Springs’s Instagram account, are currently available on shopDisney.com.

This puzzle celebrates 90 years of Walt Disney’s “Mouse Who Started It All.” Disney’s official description reads:

Mickey has pieced together a memorable career in the 90 years since his 1928 movie debut in Steamboat Willie. This 1000-piece Mickey Mouse Through the Years puzzle pictures Mickey in some of his most popular roles.

You can purchase the Mickey Through the Years Signature Puzzle here for $22.99.

Blast off on a rip-roaring rocket into the furthest reaches of outer space with our Space Mountain jigsaw puzzle. Celebrating the 45th anniversary of the beloved attraction’s opening at The Magic Kingdom, this 1,000 piece Disney Parks Signature Puzzle features the poster-style artwork.

You can purchase the Space Mountain 45th Anniversary Signature Puzzle here for $22.99.

Ariel looks to the stars while the moon glows behind her in this memorable image from Disney’s beloved The Little Mermaid. The 1000 piece jigsaw puzzle was created to celebrate the movie’s 25th anniversary.

Which Disney Signature Puzzle is your favorite? Are you going to order one for your next Disney family game night?

Even more puzzles to check out:

Comments Off on Check Out the Stunning Disney Signature Puzzle Series