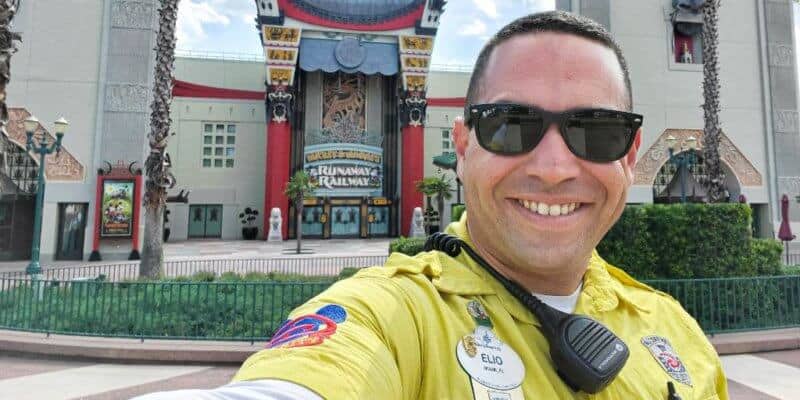 Disney fans, check in with your favorite parks via virtual tours, courtesy of security Cast Members Elio and Tina!

Elio shared on Twitter that he was “given the honor” of providing a tour of Disney’s Hollywood Studios as he “protects the magic” during the park closure. He tweeted this through the official Walt Disney World Twitter account, as well as additional photos throughout the park.

A Virtual Tour of Hollywood Studios

Hello Walt Disney World fans! I’m Security Host Elio from #DisneysHollywoodStudios and as my team helps protect the magic with the park temporarily closed, they’ve given me the honor of showing you around today! #DisneyCastLife pic.twitter.com/Y1n0XGz6xG

Behind Elio in this picture is Mickey & Minnie’s Runaway Railway; Walt Disney World’s newest attraction that just opened on March 4th, 2020. Older fans also recognize the Chinese Theater as once hosting the acclaimed The Great Movie Ride, before it closed in 2017. Despite the park having been closed since mid-March, Disney’s Hollywood Studios is clearly being well-kept and cleaned as it awaits guests in the future!

Related: Missing Disneyland? Take a Virtual Tour Around Every Ride, Attraction, and Walkway to Choose Your Own Adventure!

Key Under The Mat?

Next up, Elio shared a selfie in the entrance queue of Muppet*Vision 3D!

Many fans of the attraction were quick to reply to this tweet, asking if “The key is still under the mat”, pointing out a hidden easter egg that exists in the entrance.

Related: Virtually Visit Pandora — The Land of Avatar With These Aerial Images

A Galaxy Far, Far Away…

Next up, Elio took a trip over to the attraction Star Tours- The Adventures Continue, admitting that he is a huge Star Wars Fan!

I’m a huge @StarWars fan, so I love stopping by the AT-AT at Star Tours while making my rounds. -Elio #DisneysHollywoodStudios #DisneyCastLife pic.twitter.com/s4zoYzOSIp

This area is not to be confused with Walt Disney World’s newest land, Star Wars: Galaxy’s Edge. Star Tours launches guests to all corners of the Star Wars galaxy. While it is not located in Galaxy’s Edge, it does sit right near the entrance to that land.

Moments later, however, Elio did share a selfie in Galaxy’s Edge. Elio posed with a stormtrooper in one of Walt Disney World’s newest, and most popular attractions, Star Wars: Rise of the Resistance.

A Tour of Disneyland Park

Hello there! I’m Tina, Security Duty Manager at the Disneyland Resort. We were inspired by Elio’s look inside @WaltDisneyWorld Resort & decided to give our followers a peek inside Disneyland park. #DisneyCastLife pic.twitter.com/xUwAZNQzZw

Tina reminisces her times in Disneyland, showing River Belle Terrace in New Orleans Square and describing how it was her first job. She also shares a photo of the Mark Twain Riverboat, describing a favorite childhood memory of watching Louis Armstrong performing onboard!

I grew up a mile north of Disneyland & could always hear the whistle of the Mark Twain Riverboat. Favorite childhood memory: one summer night I saw the great Louis Armstrong performing aboard while cruising along the Rivers of America. -Tina #DisneyCastLife pic.twitter.com/JNuUe95SMp

Tina also shares an image of the petrified tree in Frontierland that is said to be between 55-70 million years old!

In Frontierland, you can’t miss this rare geological artifact: the petrified tree. It’s believed to be between 55-70 million years old! Did you know that it was a present from Lillian Disney? -Tina #DisneyCastLife pic.twitter.com/BFVDZOKkiI

Can’t wait to get back to Disney parks after checking out these virtual tours? Let us know in the comments!