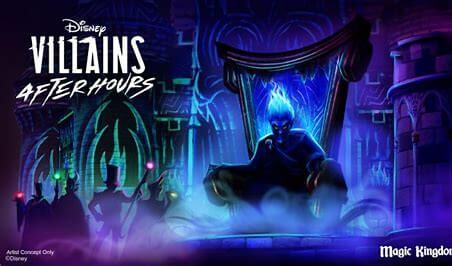 At this time, there are no more June dates available for Disney Villains After Hours events. When you visit the Walt Disney World website to purchase tickets, it brings you directly to a July calendar.

There are still tickets available for both July 6 and July 10, which are reflected in the screenshot below, but the entire June calendar is now gone. This could be a result of Disney selling out the June events or Disney possibly working on crowd control for when they do reopen the parks and host the events. An Inside the Magic staff member has tickets for the June 29th event and they have not received any notice to date of that date being canceled.

Please note at this time Walt Disney World Resort has not yet announced a reopening date for the theme parks.

The official Walt Disney World website describes this event as:

As of right now, Walt Disney World still has not yet made an official announcement as to when the parks will reopen to the public, however, they did announce that Disney Springs will begin a phased reopening beginning on May 20, 2020.

According to Disney’s official statement, a limited number of shopping and dining experiences that are not owned or operated by Disney will begin to reopen following the guidance of government and health officials.

Please stay tuned to Inside the Magic as we ill continue to update you as we get more information regarding the temporary park closures.

Do you currently have a Walt Disney World vacation planned? When are you planning on visiting the parks? Let us know in the comments.