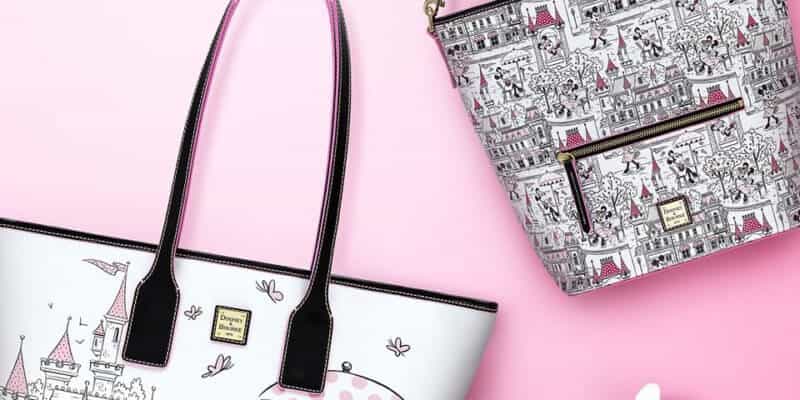 We may not be able to sip coffee on Main Street U.S.A. right now, but Minnie Mouse is savoring every drop on these new Dooney and Bourke bags, which will be available on shopDisney tomorrow, April 24!

While the Dooney and Disney teams have teased the new “Minnie the Main Street Mouse” bag release, we don’t have details about these new Disney purses just yet.

From the image, however, we can see that there will be at least two pieces: a tote and a smaller shopper style bag. The new Minnie Mouse Dooney tote features the iconic Walt Disney mouse dressed in Parisian chic style sipping coffee out of a polka dot (of course!) teacup.

Minnie sits at a bistro table with Main Street buildings and a Disney Parks castle in the background! We love the classic black, white, and pink color scheme. Pops of Minnie’s signature red are also visible in this new Dooney and Bourke tote design.

The smaller “Minnie the Main Street Mouse” purse features an all-over print that has the same image of Minnie at her French-style bistro table interspersed with large Disney castles. This bag has an exterior pocket and a removable strap.

Although we won’t know pricing until the new Disney Dooney collection officially hits the web tomorrow morning, prices will probably be in the $228 to $298 range.

This super cute Dooney & Bourke tote features a stylized Minnie riding her bike. It celebrates the 2020 EPCOT International Flower & Garden Festival, which was abruptly halted with Disney World’s unexpected temporary closure. There has been no official word on whether Disney Parks festivals on both coasts will be extended.

We also love this crossbody sketch Disney Parks Dooney bag that features Minnie, Mickey, Chip and Dale, and other iconic Disney items, such as Goofy’s hat and a tea cup!