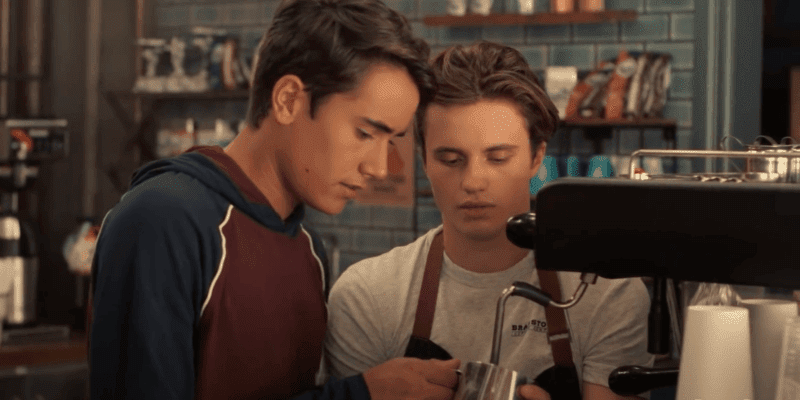 Hulu has finally dropped its first trailer for its new spin-off series to the popular Love, Simon film Love, Victor and in its first scene we’re introduced to a budding romance featuring the show’s main star that’s quite steamy–and we’re not just talking about the milk from the espresso machine.

The trailer begins when Victor walks into a local cafe to apply for a barista job when he’s greeted by the establishment’s assistant manager. From this point on, the point of authority walks Victor through the steps of what it takes to make a coffee and the two share more than just the frothing from their cappuccino.

However, the kitchen becomes too hot for victor after milk spurts all over this chest, which causes him to forfeit his application for the job and hurry out of the cafe.

The show is set to be narrated by Love, Simon star Nick Robinson and will feature Michael Cimino alongside Ana Ortiz and James Martinez in the 30-minute TV show set for a ten-episode first season.

Love, Victor will focus on the new Creekwood High School student, Victor, who faces his own challenges and adjustments, including his sexual orientation, as he moves to a new city.

The series was originally scheduled to premiere on Disney+ but as we’ve previously shared, it was moved to Hulu after it’s believed the subject matter of the show became a little too PG-13 for the family-friendly streaming service.

The show will not premiere until June 19. However, according to Pink News, a writer’s room has already been drafted for a second season.

Will you be watching Love, Victor when it premieres June 19 on Hulu? Let us know in the comments!