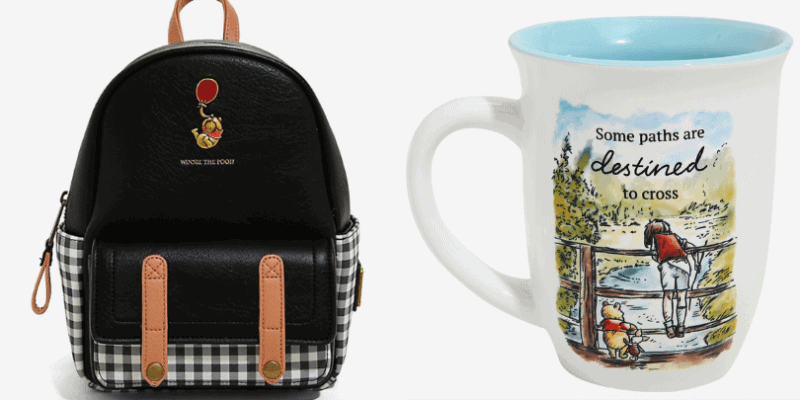 Winnie the Pooh is such a timeless Disney character that has stayed popular through the decades. If you’re a Winnie the Pooh lover like me, Boxlunch has a vast variety of merchandise for fans, from the Loungefly backpack, crossbody bag, water bottle, to t-shirts. There are some Winnie the Pooh Boxlunch Loungefly pieces that are hard to pass up especially because they’re exclusive to this store!

This Loungefly mini backpack is so classic and preppy. At $69.90, it’s a great piece for adults and children alike. It stays playful in a cute way with the signature Winnie the Pooh and balloon pattern on the inside. The button closure on the small pocket in the front adds a little different detail from the normal zipper pull. The neutral colors and plaid gives this mini backpack a certain level of sophistication. The metal Winnie the Pooh makes it seem like there is a built in pin for your Loungefly.

Complimenting the mini backpack is this Boxlunch exclusive fanny pack for $34.90. This fanny pack isn’t your typical fanny pack shape, but has a rounder, flatter shape that gives it a trendier style. It has a main pocket and smaller front pocket, which keeps your things a little more separated so you don’t drop things pulling stuff out. Sticking with the neutral color scheme, the fanny pack has more of a prominent plaid. The only non-neutral colors comes from only Winnie the Pooh which makes the silly old bear pop!

Disney Winnie the Pooh “Some Paths are Destined to Cross” Mug

Of course, who can’t use more Disney mugs! This mug has such a sweet message about friendship. It has such great artwork or Winnie the Pooh, Piglet, and Christopher Robin hanging out on the bridge in the Hundred Acre Woods. This mug is perfect for your morning coffee or afternoon tea. If you’re looking to add some honey to that, Boxlunch has an adorable life size Winnie the Pooh honey pot.  At $16.90, this mug is selling fast!

Other Loungefly Items to Check Out!

Look out for discounts with Boxlunch – they happen often!

Comments Off on This Winnie the Pooh Loungefly and Mug Will Make You Smile Every Day!