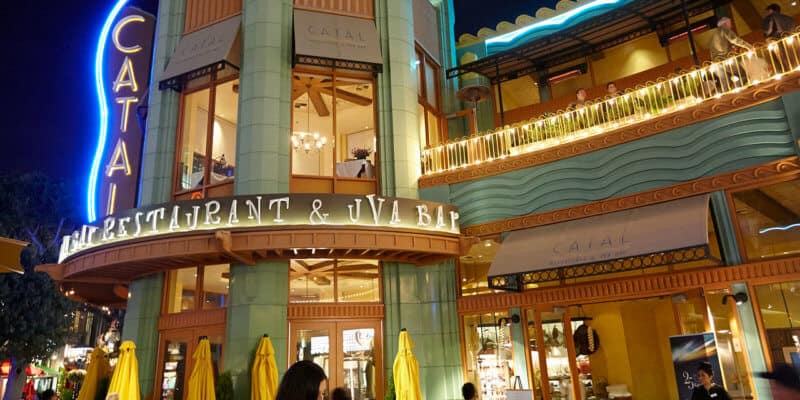 UPDATE: We have edited this article since it was originally published to include the most accurate and up-to-date information

The Patina Group is the latest in a string of restaurant corporations with a Downtown Disney and Disney Springs presence to not pay their hourly employees during the Disney Parks current extended closure, during which these restaurants will also be closed. According to our sources, a Patina Group hourly employee explained the current situation in a Facebook post.

The employee stated, “It’s nice to know that Patina Restaurant Group (who is owned by Delaware North) doesn’t wish to follow their partner, Disney in paying their hourly employee’s during this forced time off due to COVID-19.”

They continued, “The restaurants in Downtown Disney are shut down, we will not be going to work and we most certainly will not be getting a paycheck. We all have been told to file for unemployment.”

The employee was understanding of the circumstances, stating that “as an hourly employee, I don’t expect to get 2 weeks paid vacation and I most certainly don’t expect to get paid if I don’t work.” The post about the Patina Group and the restaurant industry, in general, can be read in full below: 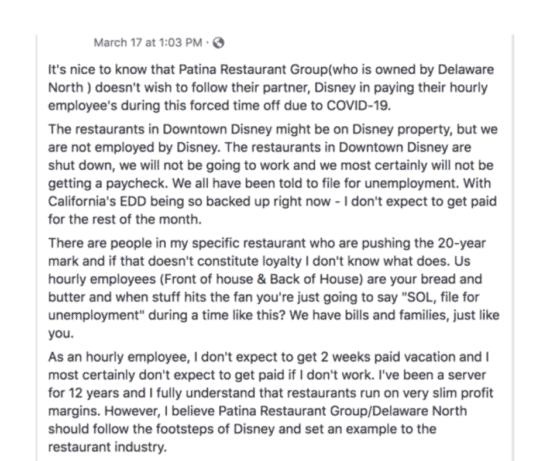 The employee later clarified that he and the other Patina Group employees were not laid off — they are being given forced time off, but unlike Disney Cast Members, the Patina employees will not be paid. Keep in mind that although employees have shared this information on social media, the Patina Group has not publicly stated anything regarding layoffs, forced time off, or unpaid leave that is occurring during the theme park closures.

Because the majority of the restaurants and retail stores at Downtown Disney in Anaheim, California and Disney Springs in Orlando, Florida are not owned by Disney, they are not required to abide by the same policies that Disney Parks and Disney Stores are operating under at the present time; this includes paying all hourly employees during the shutdown.

At Disney Springs, the corporation owns five restaurants: Enzo’s Hideaway, Maria & Enzo’s, Pizza Ponte, Morimoto, and The Edison. No Patina Group restaurants on either coast are currently operational, leaving all of their front-of-house and back-of-house hourly workers without pay.

In addition to the Patina Group, Landry’s Restaurants, including both Disney World Rainforest Cafe locations and Animal Kingdom’s Yak & Yeti has put staff on furlough during the coronavirus closure. Splitsville Luxury Lanes has also terminated its Disney Springs employees.

What are your thoughts about non-Disney owned Disney Springs and Downtown Disney restaurant workers going unpaid and being laid-off? Let us know in the comments!