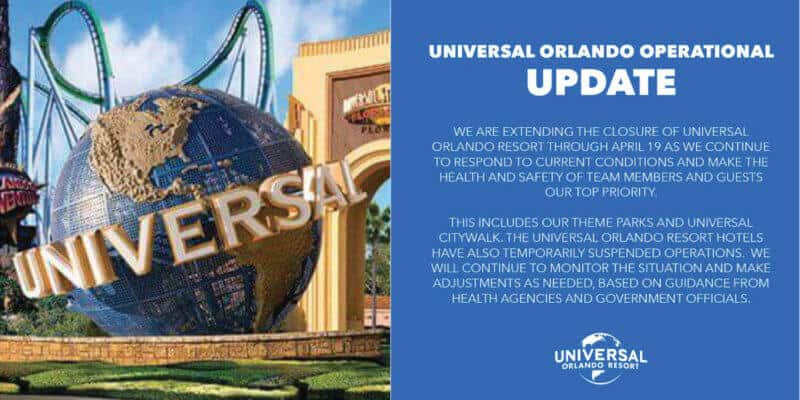 In an effort to maintain the safety of park guests and employees, Universal Studios has announced that it is extending its closure for all US parks until at least April 19th. Parks affected include Universal Studios Hollywood and Universal Studios Orlando. This announcement comes in the midst of stricter guidelines from health officials being implemented statewide due to the Coronavirus.

Here is the official statement from Universal:

“We are extending the closure of Universal Orlando Resort and Universal Studios Hollywood through April 19 as we continue to respond to current conditions and make the health and safety of team members and guests our top priority.  This includes our theme parks and Universal CityWalk at both destinations.  The Universal Orlando Resort hotels have also temporarily suspended operations.  We will continue to monitor the situation and make adjustments as needed, based on guidance from health agencies and government officials.  Updates are also posted at https://www.universalorlando.com/web/en/us and https://www.universalstudioshollywood.com/web/en/us.”

This announcement most likely comes as a result of many stay-at-home mandates being ordered by health officials throughout the country. Orange County, Florida recently just announced that it is ordering a two-week stay-at-home mandate for two weeks starting this Thursday night. Los Angeles, and most of California,had already been under a stay-at-home mandate since last week.  Even though two weeks from now would be April 7th, it appears that Universal is taking a precaution by extending its closure for a week after that date with April 15th.

As the situation is constantly evolving, we expect more updates as to when the parks may potentially re-open.

As the situation is constantly evolving, we expect more updates as to when the Universal Studios closure dates will be lifted, among other theme parks. We expect other theme parks in Florida, such as Walt Disney World and Seaworld, to make similar announcements soon.

Subscribe to our newsletter for continued coverage in the future!