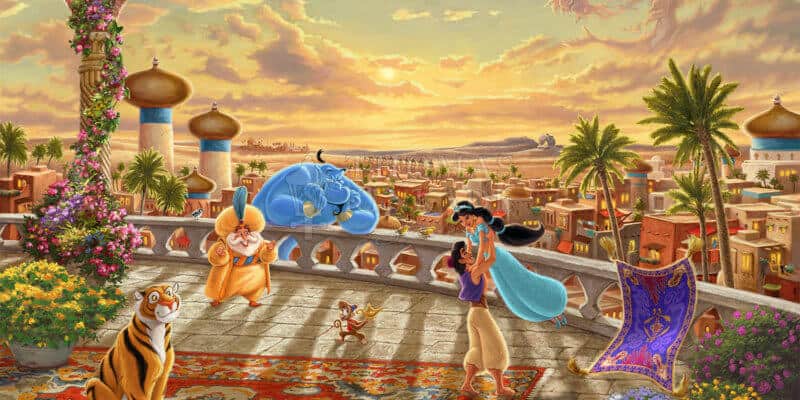 Jasmine Dancing in the Desert Sunset

Congratulations to our Sweepstakes winner Phillip T. and thank you to everyone who entered our giveaway. If you didn’t win be sure to order your own limited edition canvas of either Jasmine Dancing in the Desert Sunset or any one of their other amazing painting.

This painting captures the love between Aladdin and Jasmine with Jasmine’s father the Sultan looking on. We also have Abu, Rajah, and the Magic Carpet celebrating the love, but the biggest surprise is seeing the Genie in this Thomas Kinkade piece. How can you not like a painting that features the Genie? In my opinion, he steals the show!

And check out some of the subtle hidden details like Jafar and Iago up in the clouds. Any other surprise details you noticed? Let us know in the comments below. 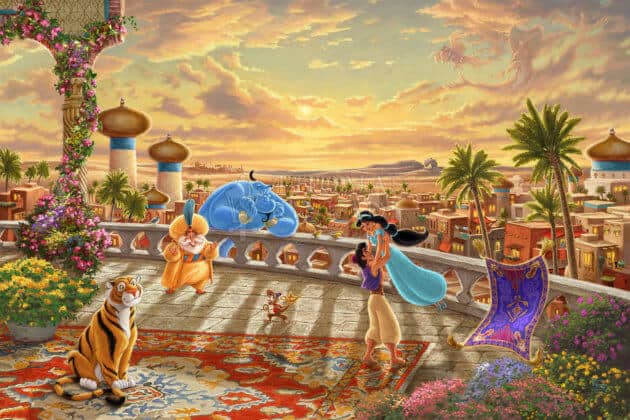 We have more to share about this painting and the Dancing in the Light series but if you can’t wait any longer skip to the end of this post and enter now.  Our giveaway is for a Framed 12” x 18” Limited Edition Canvas of Jasmine Dancing in the Desert Sunset worth $750!

Be sure to enter with an email address you actually check as the winner will be notified by email plus we will update this article with the winner’s name.

Dancing in the Light series

The Dancing in the Light series currently consists of 5 spellbinding paintings. Each featuring iconic Disney Princesses a few of which Inside the Magic has been able to feature in prior giveaways. Those other 4 paintings include:

Beauty and the Beast Dancing in the Moonlight 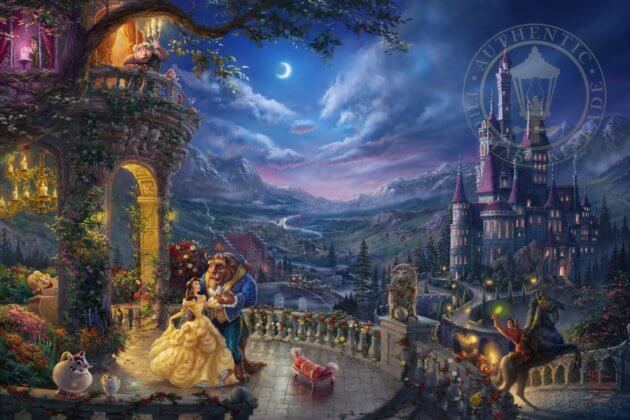 Created in celebration of the 25th Anniversary of Disney’s Beauty and Beast film the scene in this painting takes place in the late 1800s in France, upon the garden veranda of the Beast’s castle, overlooking the village. See Belle and the Beast dance in the moonlight as they fall in love.

Cinderella Dancing in the Starlight 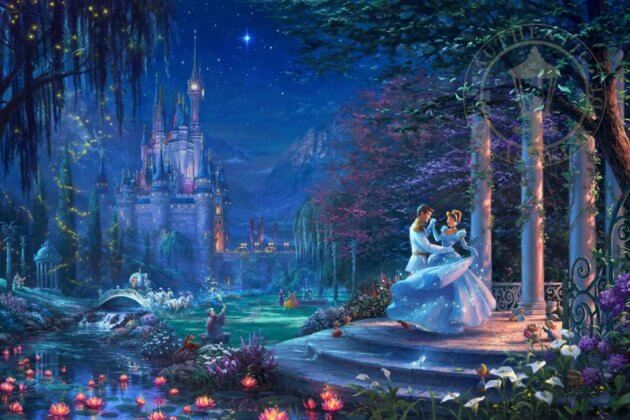 When Disney released the film Cinderella in 1950, instantly it became the new gold standard for music, animation, and visual storytelling. The American Film Institute immediately considered it one of the best American animated films ever made. This romantic scene takes place beneath the shadows of the weeping willow trees on the garden gazebo under the starlit sky. Cinderella’s beauty is such that her closest friends, Gus and Jaq stand watching in amazement, and even Lucifer, the cat, is mystified.

This simple story of a charming princess saved by a group of seven adorable dwarfs and a prince from the evil deeds of her vain and wicked Stepmother the Queen, made history when it was first released in 1937 as the highest-grossing sound film of the time. This romantic scene takes place in the courtyard of the kingdom’s castle, where Snow White and all of her friends are celebrating the defeat of the wicked Queen and reuniting of true love. 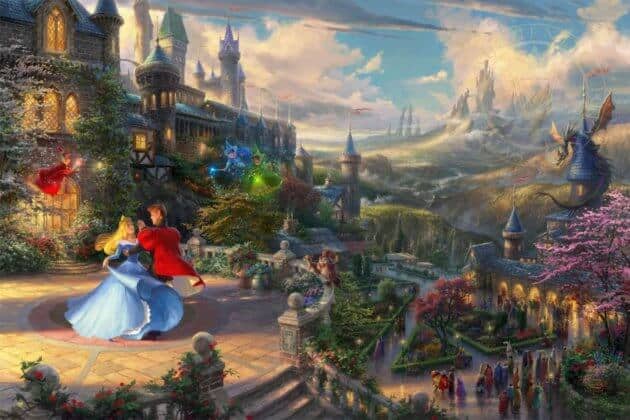 Sleeping Beauty, released in 1959, was Disney’s sixteenth animated feature and the last animated film produced by Walt Disney to be based on a fairy tale. It was also the last animated feature from Disney to be inked by hand. In this painting, Prince Phillip has already awakened Princess Aurora with true love’s kiss. We see the pair in the courtyard under an enchanted light streaming down from the good fairies. It is just the two of them, with their hearts in the clouds as they dance “happily ever after.”

So which painting in the series is your favorite? Are you a fan of Jasmine, Aladdin plus the Genie? Or maybe Belle captured your heart. Don’t forget to let us know your favorite while entering to win Jasmine Dancing in the Desert Sunset.

Maximize your odds of Winning!

The first and most important step is to give us a valid email address when you enter. Be sure it’s an email you actually check as occasionally we have been forced to pick new winners simply because we didn’t have an email address from a monitored account.

Ok, so you got the basics – use a good email address and check it to make sure you’re aware if we pick you.

We are also going to give everyone additional chances to win which can improve your odds a lot or a little.

The first category of bonus entries is sharing with your friends and family which you can do by providing them with your Lucky URL (everyone who enters with your specific link generates 25 bonus entries) or spread the word by sharing our Facebook and Twitters posts.

Next, for those of you following our sweepstakes and giveaways over the past few years, you know Thomas Kinkade Studios has blessed us with the opportunity to give away numerous paintings. Because we have so many of these past giveaways to look back on we are giving bonus entries for taking another look at each of these posts. Best of all since we all can be guilty of forgetting you can return daily and not only refresh your memory but also earn additional entries.

Be sure to take all of these actions in the app below so we can track your progress throughout the giveaway.