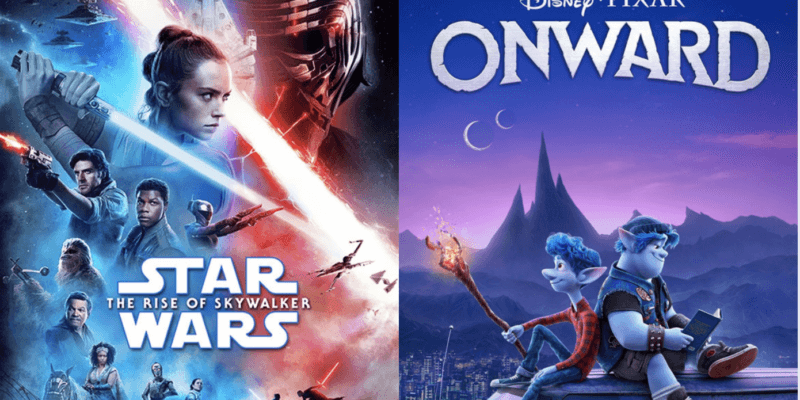 As moviegoers around the United States find themselves under mandated local quarantines to prevent the spread of COVID-19, VOD has become the go-to source of entertainment in many households. Fandango’s video-on-demand service, FandangoNow, has just had its “biggest weekend ever.”

To help fans decide what to watch next, Fandango has released a Top 10 list of its most popular movie rentals and digital copy sales from last weekend. Among the films are titles from Pixar and Lucasfilm, both companies under the Walt Disney Studios umbrella.

Pixar’s latest release, Onward, is #2 on the list, with Star Wars: The Rise of Skywalker coming in at #5. Blumhouse Pictures thriller, The Invisible Man, which had its theatrical release delayed on several occasions, tops Fandango’s Top 10 list.

Disney has announced that subscribers will be able to stream Onward on Disney+ starting April 3. This is less than one month after the film’s March 6 theatrical debut. Onward features the voice talents of Tom Holland and Chris Pratt as two elf brothers on a quest to bring their deceased father back for one final day.

Although it was released for digital purchase a few days early, Rise of Skywalker does not yet have an official Disney+ release date, but fans can already watch The Force Awakens and The Last Jedi, the other two films in the Star Wars sequel trilogy, on Disney’s streaming platform. Although Star Wars: Rise of Skywalker isn’t expected to hit Disney+ until summer, it is possible that its release will be moved up.

Disney already surprised fans by dropping Frozen 2 on Disney+ three months ahead of schedule, just following the news that Disneyland and Walt Disney World would be closing until at least the end of March.

What Disney/Pixar movie is next on your list? Are you excited about Fandango’s Top 10 video-on-demand movie list? Let us know in the comments!

Comments Off on Fandango’s Top 10 VOD Movies! What Disney/Pixar Film Should Be Next on Your List?