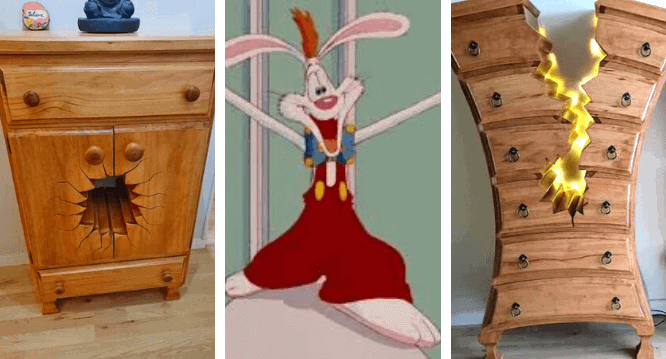 Enter Henk Verhoeff, the artisan we didn’t know we needed. A retired cabinetmaker from Auckland, New Zealand. A professional woodworker for over 53 years, Verhoeff now dabbles with his wooden creations as a hobby instead of a full-time gig. His daughter, Linda, recently shared photos of Henk’s extremely styled cabinets with a Facebook group, and the attention they garnered was immense. She then created a Facebook Fan Page dedicated to his Toontown dresser style, and it’s continuing to rack up admirers.

We often think about the ToonTown style as being blown up, curvy, bulging or stunted. The entire facade of our beloved Toontown Roger Rabbit Car Toon Spin brings to life this very aesthetic. Somehow, despite being grossly exaggerated, the proportions are charming, welcoming and entirely too much fun. It’s perfect for Disneyland. But how would it fare in your home?

The same qualities could be attributed to Henk Verhoeff’s creations, as they inspire a cartoon whirlwind of imagination and mind-blowing balance. At first, Verhoeff sketches his designs and then makes small blueprints. The drawings continue to evolve into large furniture pieces that are actually incredibly functional compared to their initial 2D vision.

When asked about his style, Henk told Bored Panda: “I describe my style of furniture as broken and weird. I like making weird furniture, something that you don’t see in a shop.” The style comes from Verhoeff’s self-professed “twisted brain” which we think could be the set of Roger Rabbit’s personal home!

Henk Verhoeff mentions that it’s difficult to say how long each piece takes to create. With an irregular hobby schedule, he tinkers for various periods of time. His schedule is unset, so he estimates each dresser takes easily 80 to 100 working hours to produce. He uses mostly recycled New Zealand pine, with various bits of lumber otherwise. This means his furniture has a lot of national pride!

Right now, all of Henk’s toon town pieces line his hallways and adorn his home. Some items are owned by his children, but being labors of love, he has never sold one. Check out the artwork and many dressers below!

How You Can Own a Toon Dresser

While you might be eager to add a Mickey style dresser to your home or even your Disney room, you may have to wait a while. These creations are still one of a kind, as advertised on Verhoeff’s Facebook page.

Linda recently posted to send her appreciation for the outpouring of support and interest in her father’s work. For example, when Linda went to sleep on February 21, she had a modest 2000 page likes on the Facebook page.  Now, less than a week later, the page has raked in over 68,000 likes and thousands of more comments. When faced with thousands of inquiries to purchase the pieces, Linda promised to update the crowd, but they were having trouble with possible shipping logistics from New Zealand. Later on, if Verhoeff decides to sell an item, they will post an Ebay link and auction site.

One of the more popular toon style dressers has a giant split in its top. The most whimsical touch of all is the backlight Henk added to enhance the split, which now glows with a soft yellow light. Mostly intact, the dresser’s drawers appear to be useless, but actually each open to store various sized items. The tiny drawers would be perfect to stow your Disney collectibles, games or to house your personal ink and paint for later creations.

Check out that drawer opening! The joints almost appear seamless, like the dresser has cracked open from some other dimensional toon force! You can see from the natural lines Henk has created, some of the smaller drawers even have a natural separator for small items. Disney Parks jewelry, anyone?

Owned by Henk’s son, this intriguing pile of timber is actually a set of hidden drawers! The long side of the lumber pile pulls outward, expanding to four various sized dresser drawers that work perfectly! Sadly, this too is a one of a kind piece and not for sale.

With all the different kinds of home items available lately, a Toontown dresser surely stands out. Don your Disney bedding, coffee makers or toasters, but for a real punch of flavor, start talking Ebay or Henk’s Facebook page for a chance to own one of these amazing creations. We personally want that lit-up marvel in our office!

Which Dresser would you add to your home? Leave us a comment below!