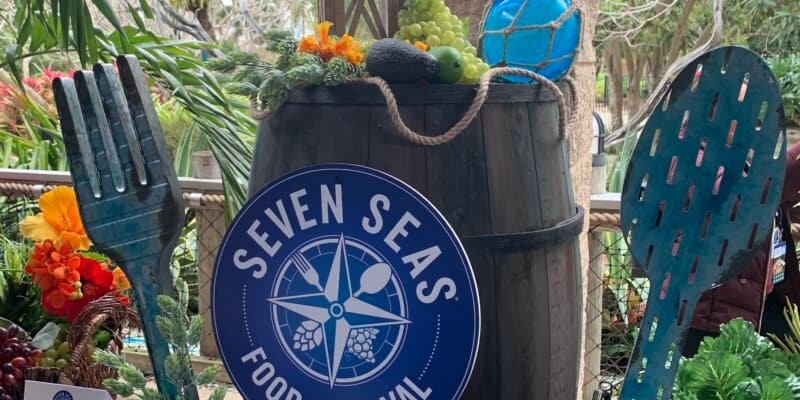 Food and Wine festivals seem to be popping up everywhere nowadays, but one festival that has continued to standout–albeit surprisingly–is the Seven Seas Food Festival at SeaWorld Orlando.

Making its return on February 7, the Seven Seas Food Festival once again showcases an incredible array of delectable dishes that features flavors from, as the name suggests, across all seven seas. This year promises more markets than ever before and a complete menu of over 125 different flavors orchestrated by SeaWorld Chef Héctor Colón.

I began the day at a media reception where I had the opportunity to try the NEW Palermo Fontina Cheese Meatball, the NEW Rainbow Cheesecake Cone topped with whipped cream–which I honestly thought was ice cream at first–and my personal favorite for the entire day: the returning Char Siu Bao.

Before heading out into the park, I had a chance to talk with Chef Héctor. There was an intense passion and joy in his voice when he explained his personal mission for the SeaWorld Orlando Seven Seas Food Festival.

Then personally thanked Chef for his delicious Bao Bun which he was serving to us personally. I asked him out of all the new food and returning options, why did he choose the Bao Bun for the reception. Chef explained in keeping with his mission of serving unique eats most people don’t see every day, he wanted to give us a taste of Asian street food in the form of this fun, simple meal perfect for festivals like Seven Seas. He said, “In America, we eat a hot dog, [in Asia] they eat a Bao Bun.”

We were then set loose into the park with a 10-punch sampling lanyard. Most of what I tried was the new culinary options Chef added this year:

I also tried the returning Grilled Lamb Chop with roasted potatoes at the Mediterranean Market and the Rum Runner at the Caribbean Market.

While I admit to enjoying the Bao Bun most of all, that is merely an acceptance of my personal taste. I did not eat or drink anything that was not incredibly delicious in its own right, especially the Cricket Crusted Bison Slider. This event is perfect for a Saturday adventure, weekend retreat or date night, and I recommend that Orlando locals take advantage of this fun experience sitting in their own backyard. If not for the food, the drinks–especially the craft beer–and the concerts.

While the food was absolutely amazing, the state of the park was rather disappointing. It has all the signs of a theme park in transition. While this is very much old news, yesterday was a stark reminder of that fact. I wanted to be able to see it with somewhat fresh eyes. And between the construction of a brand new roller coaster and addition of a Sesame Street themed land to the subtle decayed look of its auditoriums, it appeared SeaWorld Orlando is in a transition from being a park centered entirely around animals–thanks to scandals á la Blackfish–to basically a sort-of-ocean-themed Busch Gardens.

While I grew up in a generation that still loved Shamu despite the Free Willy craze, and I’m sad on some level to see the park change, I’m not against it. It would be wrong to not hope for the park’s success as any new identity. But it is the growing pains of transitions that are worse than the actual change itself, and SeaWorld looked rough. And I’ll admit, it didn’t help SeaWorld that the day’s weather was unusually bleak for Florida and SeaWorld’s roller coasters Manta and Mako were both closed.

But even though the setting was not what one would find in the ads, the food was still the shining star of the day, and this annual festival, still relatively new, continues to shine brighter and brighter with each new year. If the new SeaWorld promises more attractions of such a high quality, then I have a lot of hope for what this theme park could become in the coming years.

Walking out completely stuffed, I passed by a tank with the sign “Dolphin Nursery.” I crouched down and looked into the water and was lucky enough to have the dolphin glide right by me. All politics aside, the attraction now seemed out of place. Many are going to disagree with me on this, but the SeaWorld from my childhood appeared so much more focused on the animals. In fact, it was more of an aquarium than a theme park. But those days are over. It is now a theme park with live marine animals.

After experiencing another successful Food festival amid the next generation set of rides and lands, I can now see a future SeaWorld with very little animal attractions. And that’s okay. I can only hope SeaWorld continues this entertainment transition with the standard of quality and immersion expected of all theme parks today.

Before I left the Media reception, Chef Héctor couldn’t help but get me excited already for next year’s festival. He told me “I’m thinking about next year already. ‘What worked [this year]?’ ‘What can work?’ ‘What can I do better?’ ‘What else can I put together?’ And if I see something out there, I put it in my book and I put it away. Six months later, I start with that book.” One can only hope that every other creative mind at SeaWorld is doing the same thing.

SeaWorld Orlando’s Seven Seas Food Festival is going on right now on Fridays, Saturdays, and Sundays through May 3, 2020.

Related: Dive Under The Sea and Dine With Marine Life At This Disney World Restaurant

Have you had a chance to experience SeaWorld’s Seven Seas Food Festival? What were your favorite festival dishes on the menu? Let us know in the comments!

Comments Off on SeaWorld’s Seven Seas Food Festival: Delicious Hope for a Park in Transition