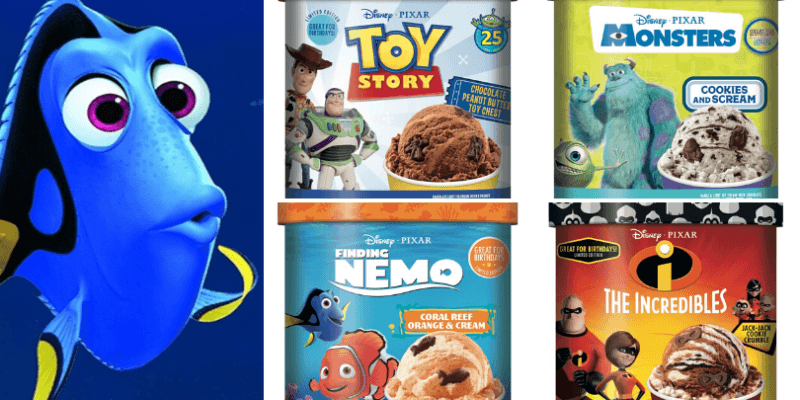 Let’s check them out (going in the proper film order, of course):

This is the kind of ice cream Andy would have after an afternoon in the backyard. This flavor features chocolate peanut butter swirl ice cream. It’s called a “Toy Chest” because it’s stuffed with chocolate chunks in the shape of Buzz and Woody and Andy’s other toys.

It wouldn’t be a true Monsters Inc. flavor if there wasn’t some scare pun in the title, and Mike and Sully’s spin on Cookies and Cream will definitely make you scream for more! They’ve put together a scary-good combination of vanilla ice cream, chocolate cookie chunks and a fudge swirl that also features fun chocolate chunks in the shape of Mike and Sully.

In honor of the world’s two favorite clownfish, we have an ice cream featuring all the colors of a clownfish: white, orange, and brown. Dive into a swirling current of vanilla ice cream and orange sherbert with fish-shaped chocolate chunks.

Jack-Jack loves his cookies, so Dreyer’s has used that as inspiration for their last incredible Pixar dessert. This ice cream features chocolate and vanilla flavors with a chocolate cookie swirl and little mask-shaped cookie pieces.

These Pixar flavors are only the lastest official Disney-inspired desserts you can find in the freezer section of your very own grocery store. Disney has already released several Mickey Mouse ice cream options including favorite park treats such as the classic Mickey Bar and the Mickey Mouse Cookies and Cream Ice Cream Sandwich. Click below to read about all the other Disney ice cream currently for sale!

What do you think about these new ice cream flavors? Which one do you think looks best? Let us know in the comments!