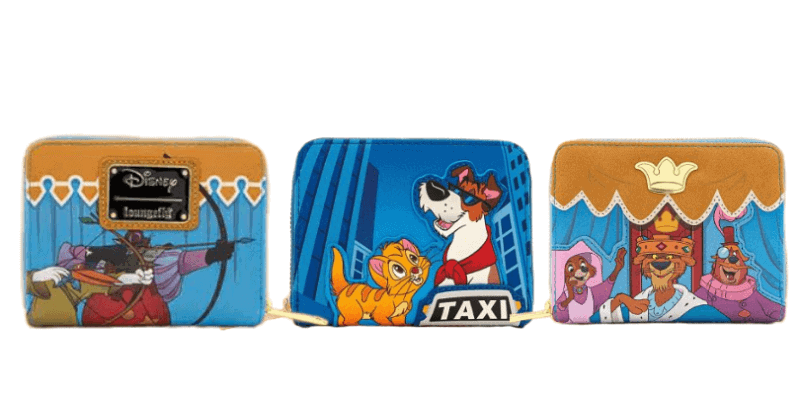 These zip-around wallets are the perfect size to hold your credit and debit cards, and they’re inspired by the archery tournament in Robin Hood when Robin is shooting for the hand of Maid Marian.

The front of the wallet features the Sheriff of Nottingham next to Robin in disguise, and on the reverse side, Maid Marian, Prince John, and Robin Hood’s partner in “crime,” Little John.

Other wallets in this collection inspired by Disney’s Oliver & Company feature Tito at the wheel in the taxi scene of the film with Georgette and Francis along for the adventure. Oliver and Dodger are featured on the reverse side of the wallet.

Each backpack features the same scenes from the films as the zip-around wallets do and they are the perfect size for carrying anywhere! (And adorable too!)

It’s out there, but sometimes fans of Robin Hood and Oliver & Company have a difficult time finding accessories featuring their favorite characters. We love that Loungefly has a new line of wallets and backpacks for fans of the lesser-talked-about Disney animated classics. Are you a fan of Robin Hood and Little John? Or are Oliver, Dodger and Tito your favorites?

So far, it looks like these new Loungefly accessories are coming to a popular U.K. retailer, but we hope they will become available in the states soon!

Which Loungefly accessories are our favorites? Do you have more wallets or more backpacks? Let us know in the comments section below!

Comments Off on New “Robin Hood” and “Oliver & Company” Loungefly Accessories Have Arrived!