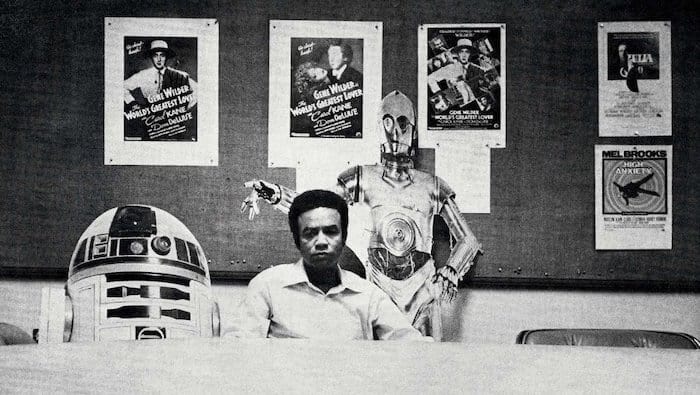 What makes Star Wars so great? Is it the script and story? The characters you love to cheer or boo? Perhaps it’s the escapism of a galaxy far far away that whisks you off your feet. What if we told you there was a man with a Midas touch that guided Star Wars to blockbuster status in 1977? The mostly forgotten, yet not erased history of Ashley Boone is a remarkable one. Befriending George Lucas in 1977, Ashley Boone used a slew of unconventional marketing techniques to bring the Force closer to home.

BEFORE A long time ago in a galaxy far, far away…

Ashley A. Boone would tell anyone about his childhood, consisting of his postal-working father and homemaker mother. Living in Springfield, MA, the Boone children all graduated from college. Ashley Boone held a degree in economics from Brandeis University when he walked across the platform in 1960. His dream was to work at The World Bank to assist nations with under-developed finances, but instead, he found himself at the television studios in New York City.

Failing to land a position there, Boone was later offered a job at United Artists to train in the office of the VP of Production. After a few years of this type of work, Ashley Boone found himself at the archway of 20th Century Fox, where he worked his way up the ladder to President of Distribution.  At this time, Boone was the highest-ranking African American executive in Hollywood, overseeing the marketing of blockbusters like Sounder, Young Frankenstein, Alien, The Omen, Star Wars, and Chariots of Fire.

Sadly, you won’t find a Wikipedia page for Ashley Boone, nor will you find an IMDB page chock full of credits.  But in hindsight, Ashley Boone is now being given his due for making Star Wars the success it was. He touted the “quirky” space opera with promotions unlike anything else of its day. Boone was given films his supervisors thought couldn’t succeed.  These movies needed careful handling, Boone detailed, in which you needed to treat movies like award winners before they were even nominated.

Boone practiced his saturated bookings and Los Angeles screenings with movies like Dirty Mary, Crazy Larry to attempt to recoup high production costs, and it worked. That movie grossed $12.1 million proving to be Fox’s biggest blockbuster that year.  Later on, Boone gave The Rocky Horror Picture Show a leg up to the midnight screenings it now hosts. These successes lead him to a promotion to Vice President of Marketing AND Distribution; a combination of jobs that had never been held before. “Ashley was just a very bright person,” Alan Ladd Jr. told a PGA’s in-house publication, “I never considered his color. That had nothing to do with it. He was simply the smartest guy around.”

Boone’s relationship with George Lucas was a most special one. The Hollywood Report was told by Lucas himself, “I had a bad time with the studios. The only one I didn’t have a bad time with was Fox, and it was really because of Ashley and Ladd.” Lucas met Ashley Boone in 1977, during a rough cut of Star Wars.

Boone was reportedly blown away by the screening, and I’m sure his brain was spinning with his upcoming marketing ideas. Boone began this summer blockbuster’s premiere early on, while school was in session and pupils could buzz about the plot together. He tested the movie in San Francisco three weeks before it opened, monitoring reactions. By the time the opening day came on May 25, 1997, Star Wars was in just 32 nationwide theatres.

Boone took a risk with a mid-week Wednesday morning opening, but it paid off. By the time the theatre opened, lines were out the door. Boone was also in charge of reporting these opening weekend numbers to his head honcho, George Lucas, who ran away to Hawaii to avoid any possible bad news of the Star Wars opening. But Boone had huge numbers to give him. Star Wars brought Fox an incredibly successful year with a modern-day haul of over $3.3 billion.  Ashley Boone was a relative newcomer to film marketing and had shaken it up like a Snowglobe. 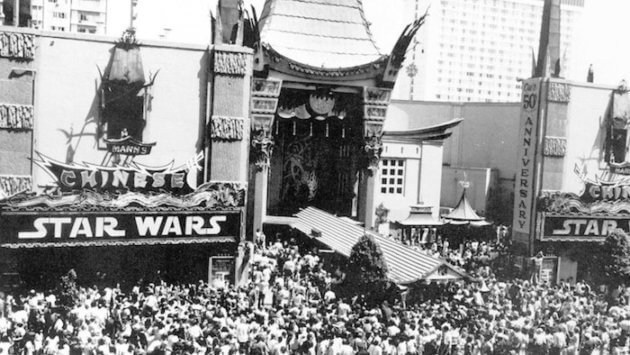 The Associated Press commented in 1977,  “The good men wear white, the bad guys wear black and there’s no sex, character development or social criticism. But Star Wars has managed to break theater records all over the country, and to send 20th Century Fox’s fortunes rocketing.” Ashley Boone was on hand to give insight that “Theatergoers are seeing something they can’t possibly live as a normal human being.” Perhaps that was why the escapist movie into the outer reaches of the galaxy had an avalanche of viewers, allowing Boone to “look longingly to the end of the month when Star Wars goes into hundreds of more theaters.”

The Death of Ashley Boone

At age 55, Boone died of pancreatic cancer at his home in Beverly Hills, survived by close relatives including his sister, Cheryl Boone Isaacs, and his companion, Mark Bua. The New York Times carried his obituary on May 4, 1994, (which Star Wars Fans will notice is STAR WARS DAY) saying,

“Ashley A. Boone Jr., a motion-picture marketing and distribution executive associated with hits like “Star Wars,” “The Empire Strikes Back” and the James Bond movies, died on Sunday at his home in Beverly Hills, Calif. He was 55. The cause was pancreatic cancer, his family said. Mr. Boone also contributed to marketing campaigns for “West Side Story” and “Chariots of Fire.” At his death, he was a marketing consultant for MGM/UA.

Mr. Boone, a native of Springfield, Mass., and a graduate of Brandeis University, [he] entered the film industry in 1964 as the director of foreign advertising, publicity and promotion for United Artists. Over the years, he became the first black to hold top marketing positions at United Artists, 20th Century Fox, the Ladd Company, Columbia Pictures, Lorimar Pictures, and MGM. In 1979, as the president for distribution and marketing at 20th Century Fox, he was the highest-ranking black executive in the industry. It was a period of turmoil in the studio’s executive suites,  and he left at the end of that year to establish his own company, ABJ Enterprises.”

Leave a comment or tribute to Ashley Boone below!