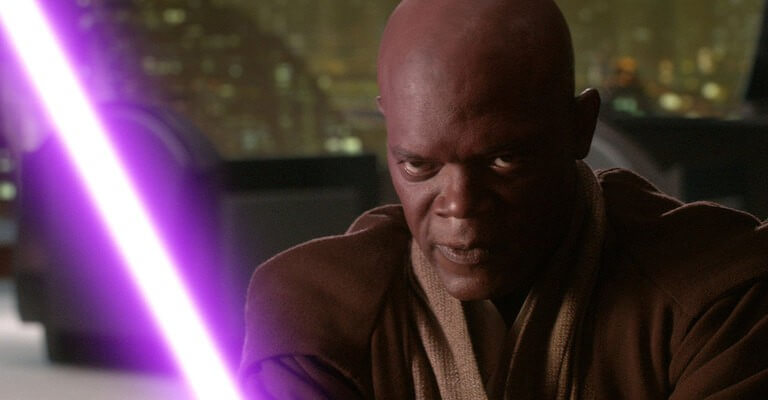 As the new Disney+ series, Kenobi, progresses further in production, more “leaks” are beginning to be churned out of the proverbial Star Wars rumor mill. The latest of which involves the epic Jedi Master Mace Windu.

“How would Mace Windu return?”

The rumor states that Mace Windu will most likely return as part of a series of flashbacks. That means we will see Samuel L. Jackson in the flesh rather than just a Force Ghost. Jackson already went on record to say he was very interested in playing the role of Mace Windu one last time. But many could assume he achieved that when he returned as a voice cameo in the climactic scene of The Rise of Skywalker. Having Windu appear in Kenobi would allow Star Wars fans to see him in the flesh, as well as give him the chance to wield his iconic purple lightsaber one more time.

Other Characters Expected to Appear

Jackson’s Mace Windu is not the only character from the Star Wars Prequels expected to make an appearance. The infamous Jar Jark Binks is rumored to return, as well as Ray Park’s Darth Maul. The possibility of flashbacks means that we could see a return of Hayden Christiansen’s Anakin Skywalker and fan-favorite Ahsoka Tano. It would also make sense to have Liam Neeson’s Qui-Gon Jinn return as a Force Ghost as Obi-Wan continues his training in solitude.

“How credible is this rumor?”

While Disney and Lucasfilm have yet to confirm these rumors, the information comes from a reliable source, relatively speaking. In other words, a majority of their rumors turn out to be true. The story of Samuel L. Jackson comes from the same sources who most notably leaked the news about Rey being Palpatine’s granddaughter and even that Ewan McGregor would return to Star Wars for his Disney+ series. We advise you, once again, to take all rumors with a grain of salt until they are confirmed. But considering the sources’ track records, the news of Mace Windu warrants some attention.

Do you think we will see Samuel L. Jackson’s Mace Windu in Disney+’s Kenobi series? Do you want to see more prequel characters return? Let us know in the comments!