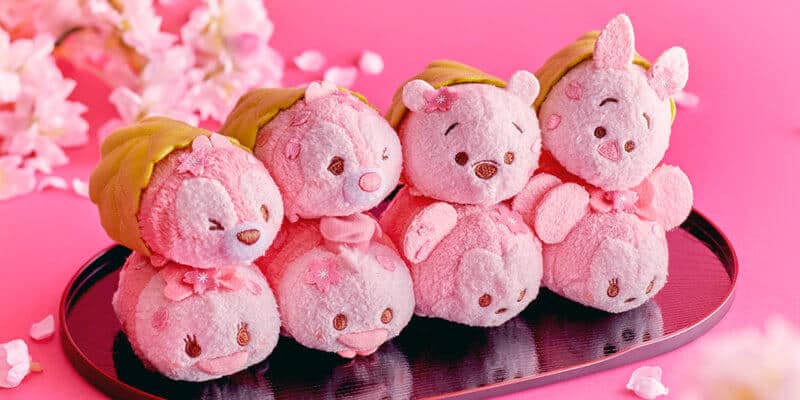 Disney has just released a brand new line of super cute Tsum Tsums that are based on Sakura Mochi. For those of you who aren’t aware of many Japanese delicacies, a sakura mochi is a type of sweet that consists of a pink-colored rice cake and a red bean paste center. The sweet treat is wrapped in a delicious pickled cherry blossom leaf and you’re likely to encounter different variants on this depending on where you are in Japan! Here’s an actual picture of a sakura mochi so you have one to reference later:

Now I’ve got you hungry, I’m going to disappoint you…sadly these new Tsum Tums aren’t actually edible but boy do they look great and they come in a lot of different character variants. Here’s the confirmed list of Tsum Tsum plushes now available in sakura mochi form:

Here’s a closer look at some of these awesome characters:

I absolutely love how well they have captured the real-world sweet treat here, here’s the complete collection again so you can admire them all together. Literally the cutest line of Tsum Tsums I’ve seen in a long while!

Of course, the only problem with this new collection, they’re currently only available through the Disney Store in Japan. It isn’t impossible to order from the website but it’s a little tricky and if you’re going to do it, I’d advise you buy the entire collection! There’s still hope that this set makes it to the Japan Pavilion in Epcot. Things like this have happened in the past so fingers crossed! If you can get your hands on them, they aren’t overly pricey, coming in at 660 yen, or $5.99.

You could also book yourself a little trip to Japan… if you fancy it, make sure you use our friends at Acadamy Travel, the Authorized Disney Vacation Planners who are experts on all things Disney Parks!

Are you a fan of this Tsum Tsum collection? Let us know in the comments below!