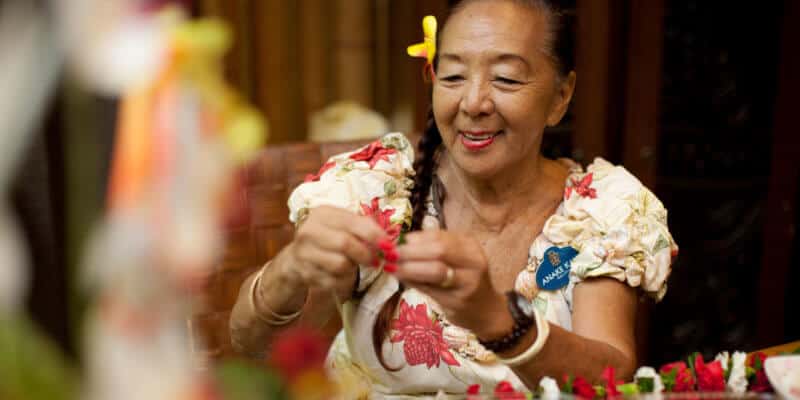 We have updated this article since it was originally published to include photos and a statement from Disney.

It is with a heavy heart and many fond memories of extreme kindness that we share with you the passing of Auntie Kau’i Brandt. Auntie had shared smiles and culture with thousands of guests since 1971 when she helped to open Disney’s Polynesian Resort. In 1932 at home in Pearl City, Hawaii, Auntie was born to thundering overhead with masses of lightning. Her Grandmother named her Kau’ihealani, which meant “Thundering Voice of Heaven.” Later, she added Anake, which means “Auntie” in Hawaiian.

Anake (Auntie) Kau’i Brandt saw the invasion of Pearl Harbor from her roof as a child, when her mom scolded her that war was starting and to come inside. She remembers the difficulty she had as her friends were taken from her and imprisoned, as the war ended and the island rebuilt. Kau’i began casual hula lessons at age 6 and continued to teach them to her children, grandchildren and Disney guests even in recent years. She remembers when her boss in Waikiki told her to go with Disney talent scouts and advise them on the opening of a new Disney Resort. She told the Orlando Sentinel that she was hesitant to go because she had heard, “once you leave Hawaii, you never go back.” She shook her head with a sad laugh in 2014 that it really was true, and she was working to keep Hawaiian culture alive and to share it with others. Auntie had an 83rd birthday party in 2015, making her around 88 years old at her passing. While Disney has confirmed her death to Inside the Magic via phone on 1/10/20, this editor shared tears with the Cast Member on the phone.

Disney Parks Blog Reports, “The day after she passed, Walt Disney World Resort President Josh D’Amaro visited her home resort with Thomas Mazloum, senior vice president of Resorts and Transportation. Together with cast members of Disney’s Polynesian Village Resort, they gathered at sunset to remember their longtime friend in Hawaiian and English and song.”

Auntie Kau’i has had many fan pages over the years. When you met her, you saw kind eyes and a soul that focused on you in that moment. She would take your hand or offer you some beautiful Hawaiian phrases to share with your friends and family. Many Walt Disney World Resorts Guests have felt that kindness, and are sharing their sorrow together on social media. Yvonne M. McGreevy shared a memorial notice with her friends.

The big online Facebook fan club announced just a few hours before this article was written, confirming the death of Auntie the previous night. There has been no mention of the cause of death, only sharing of stories and love for their Auntie.

Our Ti Leaf Lei from Auntie

When I last met Auntie Kau’i, she sat serenely at a small table covered in leaves, flowers, and strings in the Great Ceremonial House of Disney’s Polynesian Resort. With another Cast Member, she deftly wove flowers and Ti Leaves together, creating traditional circlet Leis as well as the open style from Ti leaves, worn historically by men. Though my family tried to make a beeline out of the BouTiki to end our vacation, her blue Disney Legacy name tag caught my eye as we approached. She was the famous Auntie! I called her name as dearly as though we were related, and she looked up with a smile and a warm, “Aloha!” I leaned over her table to tell her what beautiful work she was doing and how really lovely everything was. The fragrance was enchanting.

We were walking out to catch our Magical Express bus, but I asked if I might shake her hand goodbye. Instead, she called to the Cast Member next to her to hand over a Ti Leaf lei that was for sale on the table. He scoffed a little, but handed it over nevertheless as she gently fussed to him. Without hesitating, Auntie placed the Ti Leaf Lei over my son’s shoulders. She insisted to my son that he take it on his journey and it would bring him luck. I teared up at the thoughtful, worthy present. I hugged her and thanked her for her kindness. She smelled of tropical flowers.

When we got home, I took the sap-oozing Ti leaves off my son,  drooping nearly to his knees on his elementary-aged stature. We had a round wooden curtain rod extending from fishing-net printed curtains in his ocean themed room. I gently hung it to dry, much like I had waited on my wedding bouquet roses to freeze still in time. That was nearly 2 years ago.

The gift that Auntie sent us off with still hangs in our house, and I look at it each time I enter my son’s room. It was a gift made with love and handed to a complete stranger as a thoughtful way to send them on a journey.  It shocked me that she gave it to us, as it took a long time to make and was worth so much. I find that now, years later and with Auntie’s death, it is worth more and more. I wish I had the chance to see her dance when I stayed at Disney, and have found myself searching for videos of her this week. Aloha, Auntie; it was such an honor to meet you.