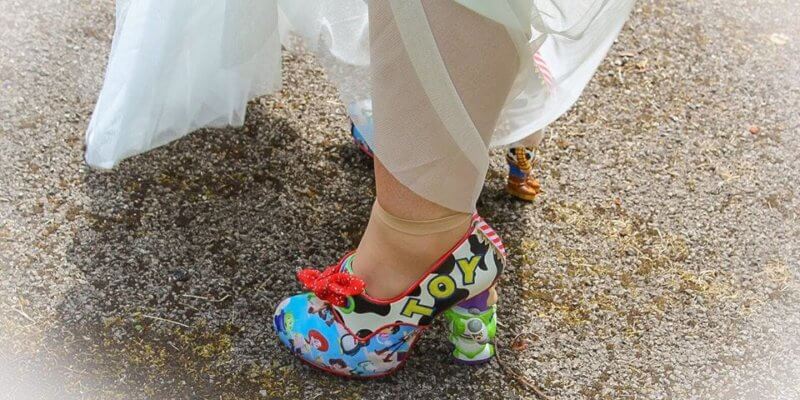 If you thought you were a Toy Story mega-fan, you may want to think twice because Lindsay Ashton took her passion to a new level.

Lindsay Ashton, 28, recently got married to her now-husband John, 38, in Lancashire, England. During their July 2019 wedding, Lindsay decided to break some traditions and wear high heels featuring one of her other loves, Toy Story.

“It’s just a brilliant film with feel-good emotions every time you watch it with the characters’ friendships,” Ashton told Insider.

Related: Guests at this disney wedding were assigned rides instead of table numbers

Lindsay also admitted that she “didn’t like the thought of plain wedding shoes” so her choice to go with the Toy Story high heels seemed like the perfect decision.

Lindsay actually found the unique Toy Story heels on Ebay by Irregular Choice, brand new for £119.99 (which equals to about $155 US).

“I saw them and John said to me ‘Yes, buy them! They’re definitely you, and they’ll look amazing as your wedding shoes.’ So I bought them!”

And as you can imagine, the high heels were not the most comfortable shoes to wear (just like most high heels). In fact, Lindsay said they were “not at all comfortable enough to wear all day”. She ended up only wearing them for about an hour and a half, but she managed to keep them on for all the main photos after the ceremony!

“They are a strange position that is not natural for your feet to be in for long periods of time,” Lindsay said. “I also had to put a grip sticker on each shoe as the soles are like a vinyl photo print, one says Andy and one is a photo of Buzz which is really shiny and slippery to walk in.”

Related: 2019 was a great year for Disney Weddings and Engagements

Lindsay Arnold is such a big fan of the Disney Pixar film, she even has a sketch of Buzz Lightyear tattooed on her leg.

“I am a huge fan of Buzz Lightyear,” she said. “I have a Buzz sketch tattoo on my leg which I love more every single day.”

“I am planning on having a Rex tattoo on the other leg for my one-year-old daughter who loves dinosaurs, and I brought my daughter home from the hospital when she was born in a Buzz outfit too!”

We want to wish Lindsay and John a lifetime of happiness!

Related: This Christmas Eve wedding at Walt Disney World is bringing all the feels

What do you think of the Toy Story themed high heels that Lindsay wore down the aisle? Let us know in the comments.