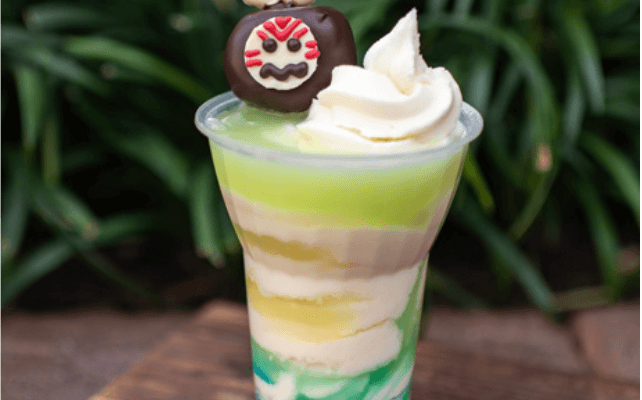 That’s Tahitian for Merry Christmas! We say it loud because we have to talk about the Moana-inspired Dole Whip float that can be found at Mickey’s Very Merry Christmas Party this year!

Called the Kakamora Float, the treat features coconut soft-served ice cream with pineapple juice blue curaçao syrup (non-alcoholic, unfortunately). It is capped with a chocolate Kakamora cake pop. The Kakamora Float is only available at the Aloha Isle during Mickey’s Very Merry Christmas Party. Sounds like the Dole Whip version of a piña colada!

We remember the Kakamora as those menacingly cute pirates in Moana. They were tiny creatures with most of their bodies inside of coconut shells and drew scary faces on the outside.

But these two treats are not the only Dole Whip changes happening at The Magic Kingdom.

Yes, the Pirates of the Caribbean-themed sweet has completed its stay at the famous Sunshine Tree Terrace in Walt Disney World’s Adventureland. The strawberry-flavored float made its debut this summer and was replaced this week by the new “I Lava You” Dole Whip Float.

The new menu option was inspired by the heartwarming Disney short film that showed the love story of two volcanoes. It is made of Orange Dole Whip, orange Fanta, strawberry and passionfruit syrups, and candies similar to pop-rocks. Pictures are pending.

If you are planning your next Dole Whip run to The Magic Kingdom, our friends at Academy Travel are standing by to provide expert advice and help make this trip the best one yet!

Are you a Dole Whip fan? Which one is your favorite? Let us know in the comments!