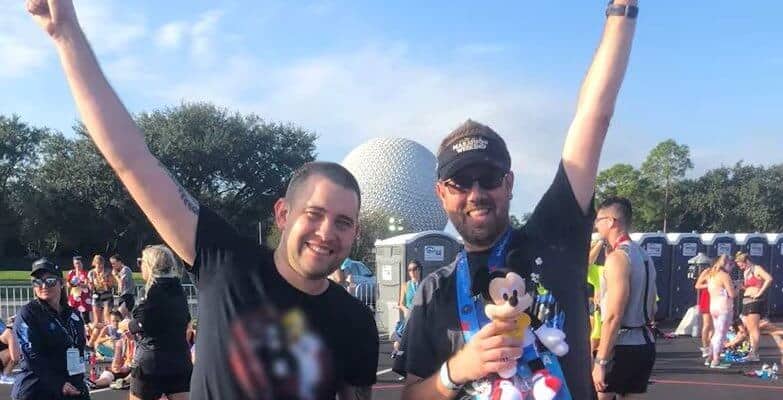 Get the tissues ready- for two runDisney participants this year’s Disney Wine & Dine Half Marathon culminated with an outpouring of gratitude and emotions.

Boyd Dunleavy is a Canadian runner who was diagnosed with acute myeloid leukemia, a rare blood cancer, in 2011. Dunleavy’s doctors estimated that he would have about a 10% chance of living more than just a few months if his medical team was unable to find a matching stem cell transplant donor outside of his family. Miraculously, after various treatments and a cancer relapse in 2012, Dunleavy’s doctors found a match- Nathan Barnes.

When Barnes was identified as a match, he was stationed in Japan as a gunners’ mate in the US Navy, but he was still able to donate the stem cells that would ultimately save Dunleavy’s life. Dunleavy was awestruck upon learning that a match had been found and that his donor’s name was Nathan: “When we found out it was a gentleman named Nathan, it was incredible,” he said, “Our middle son’s name is Nathan, and it means ‘Gift of God.'”

While recovering from the transplant procedure, Dunleavy began to use running as a recovery aid, which quickly turned into a passion. Since his transplant, , multiple virtual races, four half marathons, and a few 10K races.

Dunleavy ran in this year’s Disney Wine & Dine Half Marathon, and after seven years of being stationed overseas, Barnes was able to attend the race and finally meet Dunleavy and his family. Barnes met Dunleavy at the finish line of this year’s race to award him his medal.

“My motto is ‘never lose hope,'” explains Dunleavy, “Life is a special gift. We were told that with the stem cell transplant, my chances of living five years were only 30 percent. This is Year 7! Never lose hope.”

How touching was this story?! We love seeing the runDisney community bring together real-life magical moments and are wishing Dunleavy the best as he goes into Year 8!