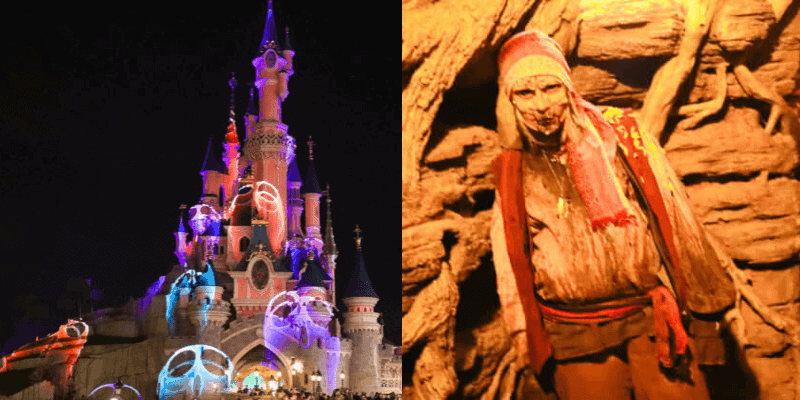 Contrary to what you are used to living in the U.S., there are not so many Halloween parties in Disneyland Paris. But this year, for the first time ever, Disneyland Paris offers not one but TWO nights to enjoy Halloween! I got the opportunity to attend this year’s event and it was the funniest night of the year at Disneyland Paris.

The party started at 8 PM after the park closed but guests could enter the park starting at 5 PM and enjoy rides and shows while waiting for the night to begin. Lines to meet the star of the night – Oogie Boogie – and other characters such as Jack Skellington and Cheshire Cat started from 5 PM and some guests waited 4 hours to meet Oogie Boogie! Oogie Boogie was a Halloween Night exclusive, so of course, all guests wanted to grab a picture with him!

Meanwhile, if not in the lines, we could enjoy exclusive shows such as Captain Hook’s Pirate Academy – a 20 minutes show where Hook and Smee taught us some moves to become real pirates. There was also the Goofy and Max Spooky Space Party, a super fun dance party where we danced and had the best time with Goofy and Max dressed like Buzz Lightyear dancing in the heart of Discoveryland.

Speaking about shows, the Halloween Festival’s main show – Are you Brave Enough? – was also played on the Castle stage 5 times during the night!

And because Halloween in a Disney Park is not the same without a parade and some Disney Villains, The Disney Halloween Parade ran 2 times from Fantasyland to Main Street USA with special projections on the Sleeping Beauty Castle!

And, contrary to The Mickey’s Halloween Cavalcade where Villains are completely missing, The Disney Halloween Parade was a real Disney Villains Parade and it was super cool. Some of the villains are so rare in Disneyland Paris that guests can only catch them during special events like Halloween Nights.

Some villains that showed up to party included:

This year the Disneyland Paris Halloween Night was not just a Villains Party. It was also quite scary for the youngest guests, especially in Adventure Isle where some zombies were guarding a treasure. To be clear we did not try to steal the treasure, but they did scare us in many ways and screams and shout could often be heard around the Isle. This created a much different atmosphere than Mickey’s Not So Scare Halloween Party at Walt Disney World.

On this occasion, a special projection was on Skull Rock, making it talk and melt while surrounded by campfires. Adventureland is already a mystic land all year long, but this night was even more mystical than what we are used to. It was incredible!

Speaking of projections, just like what they did for the Phantom Manor reopening event, a special projection was displayed on the Manor during the night and it was so cool!

In Frontierland, which is decorated as a Dia de Los Muertos land during the Halloween Festival, another dance party was hosted by zombies in front of Cowboy Cookout Barbecue. In this Fiesta de la Tierra des Los Muertos, guests danced to Latin music with Skeleton Goofy until the end of the party. Again, so much fun!

And not so far from the party, a Mariachi Band played many times during the night adding special Mexican vibes to the night.

And of course, guests could meet many Disney Characters during the Halloween Party, some of them were even wearing special Halloween costumes. You could also ride most of the Disneyland Park attractions until 2:00 AM! It is rare to get to take a break on Thunder Mesa Riverboat Landing by night so we that we obviously had to do it! Another wonderful idea is to ride Big Thunder Mountain at 1 AM!

The night ended with special guest Mike Williams giving us his best sound in Discoveryland. What a night!

Well, this Halloween Night was awesome, we loved every minute we spent in the park and enjoyed all the shows, dance parties and rides we experienced! And judging by all the comments I got from Instagram and Youtube, this year was one of the best Disneyland Paris ever hosted. I will be there again next year, for sure!

I hope you enjoyed this tour. If you’re interested in visiting Disneyland Paris and need helping planning the vacation of your dreams, don’t hesitate to reach out to our friends, the Authorized Disney Vacation Planners at Academy Travel, for a free quote, today!