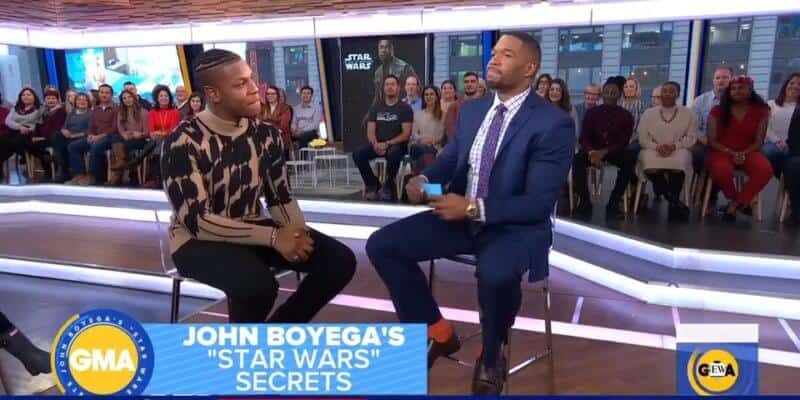 Earlier we reported the story of the lost script for Star Wars: Rise of Skywalker getting lost and ending on eBay. It looks like the culprit has built up the courage and fessed up to the mistake.

The lost script that ended up on eBay was actually purchased back by Disney. We can imagine the high-stress levels this must have caused the studio when they go through such lengths to keep spoilers and storylines under wraps. It would be no fun for these massively anticipated films to be ruined by some unfortunate mishap. Thankfully, that crisis was quickly averted. But not without some backstage drama prior to the resolution.

John Boyega, Star Wars actor who plays beloved character Finn visited the set of Good Morning America this morning to promote the upcoming Star Wars film, Rise of Skywalker. During the interview, in a shocking turn of events, he takes the blame for being the one who lost the script for the new movie!

Joined by Stormtroopers in the studio, Michael Strahan began the interview by reminding us that in just 22 days, we’ll get to experience the ending of the saga. After some light banter and small talk, the interview took an unexpected turn. John, in his most adorable English accent, revealed a secret he’d been carrying about a now-infamous lost script.

Boyega continued to give us his side of the story:

“I was moving apartments, and I left the script under my bed,” he began. “I was like, I will leave it under my bed and when I wake up the next morning, I will take it and then move. But then my boys came over and we started partying a little bit. And the script, it just stayed there. And a few weeks after, this cleaner comes in, finds this script and puts it on eBay for like 65 pounds ($84). The person didn’t know the true value.”

To our surprise, the actor also confessed he still doesn’t know how the film ends.

“I don’t actually don’t know because we shot several different things,” he said. “I’m curious. I think I watch the movie next week for the first time.”

We totally love his honesty here and we’re also really glad Disney was able to clean up what could’ve been a really unfortunate mess. We don’t think anyone would have wanted to have this saga ending spoiled before we get to experience it on the big screen for ourselves.

The Star Wars: Rise of Skywalker hits theaters on December 20th. We have our tickets purchased and we are impatiently counting down. Are you ready? Let us know in the comments when and where you’ll be watching. May the force be with us all as we count down the days!