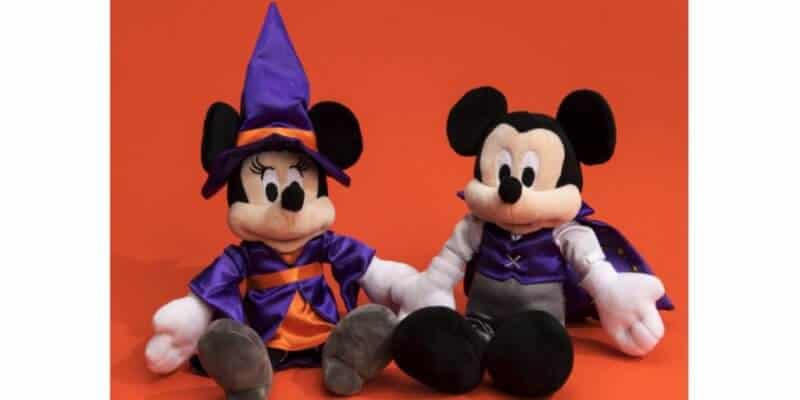 There is no other gang that celebrates Halloween quite like Mickey and his friends do. And with Halloween right around the corner, Disney Parks has released all new Mickey and Friends Halloween merchandise just in time for the celebrations.

First up in this Disney Halloween merchandise line, we have Mickey Mouse is dressed in his Halloween best, going as a vampire this year. Disney Parks are now selling a Mickey Mouse Vampire plush, perfect for your Halloween display at home or to snuggle up next to at bedtime.

Also available are two new vampire themed sweatshirts. First up is this spooky black hoodie, complete with ears on the hood and a cape draping in the back – perfectly resembling a vampire.

The other brand new Halloween hoodie that just debuted is a simple black sweatshirt with vampire Mickey on the front accompanied by the words “Prepare to be scared.” Down the sleeve you’ll find grey silhouettes of bats, because where would vampires be without bats?

Watch out because this year Minnie Mouse will put a spell on you with her spooky decor. Minnie is going as a witch this year and Disney Parks just released all new decorations.

To go along with your Vampire Mickey plush, check out this adorable Witch Minnie Mouse plush doll.

Also new this year are two Halloween themed kitchen towels. This set will go perfectly in your kitchen, right next to where you brew something up for Halloween night. Do I smell pumpkin?

Disney fans can welcome guests to their homes with this Minnie wall decoration. Of course, her pal Figaro is hanging out right beside her in the cauldron that reads “trick or treat!”

And of course, where would the gang be without Mickey’s best furry friend, Pluto, along with the two furry jokesters, Chip and Dale.

This year, Pluto has decided to dress up as a mummy and Disney Parks is now selling this adorable Pluto Mummy plush to go alongside the Vampire Mickey and Witch Minnie ones.

And last, but certainly not least, everyone’s favorite duo — Chip and Dale. Chip and Dale decided to join the Halloween fun and have dressed up as Dr. Frankenstein and his creature.

All of this brand new Disney Halloween merchandise is available across both Walt Disney World and Disneyland.