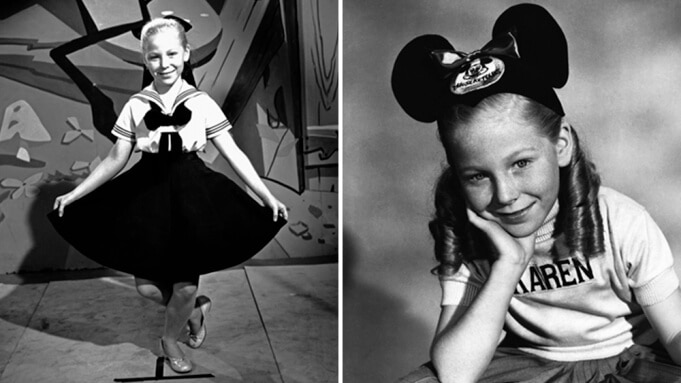 Original Mouseketeer from the first “The Mickey Mouse Club” in 1955, Karen Pendleton, died at the age of 73 after suffering a heart attack.

Pendelton, one of the original nine Mouseketeers who served on the 1950s TV show during its entire original run passed away in Fresno, California on Sunday. Pendleton was first recruited to audition for the show when Disney producers visited a Los Angeles dance studio seeking young talent.

Pendleton was on the show with many other famous Mouseketeers, including Jimmie Dodd and Carl “Cubby” O’ Brien.

After Pendleton’s run on children’s television, Pendleton left show business to finish school. In 1970, the retired actress got married and later had a daughter. Pendleton got in divorced in 1985. In 1983, Pendleton was involved in an automobile accident which left her paralyzed from the waist down.

Following the accident, Pendleton returned to college and earned a bachelor’s degree in psychology. She later worked at a shelter for battered women and served on the board for the California Association of the Physically Handicapped.

According to Deadline, Pendleton maintained friendships with some of the original Mouseketeers from the beloved television series. “My mom loved her Mouseketeer family,” Pendleton’s daughter Staci said to Deadline. “Getting together with them was always a high point. It gave her the opportunity to relive great memories and to meet so many Mickey Mouse Club fans that watched the show as kids and loved her. Many told her that they named their daughters ‘Karen’ in her honor.”

Sadly, Pendleton isn’t the only Mouseketeer from the original cast of the show to pass away this year. Earlier this year, Dennis Day’s body was found in his home by police. The actor had gone missing the year prior without a trace.

Did you watch the original Mickey Mouse Club when it aired on television in the late 1950s? Let us know in the comments!

Comments Off on Original Mouseketeer Karen Pendleton dies at age 73