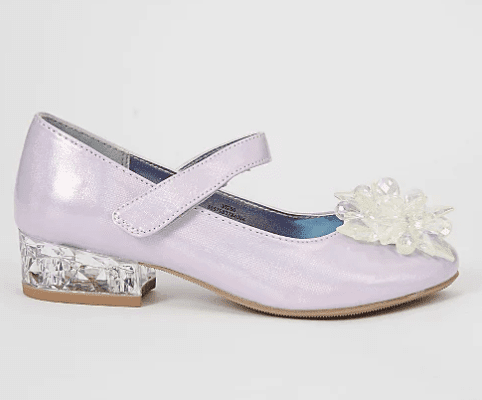 Disney is really beginning to gear up for the worldwide release of Frozen 2 with all the merchandise we’ve been seeing from them recently.

Asda, a huge grocery store chain in the UK (owned currently by Walmart), has begun selling a pair of light up shoes inspired by the popular franchise. The shoes are currently available in store at Asda as well as online, but at the time of writing the shoes were already selling out online with only a limited number of sizes still available. The good news is that stores seem to be selling out at a slower rate, so this is likely your best bet at getting a pair currently.

Check out the light-up shoes below:

The shoes come decorated with crystal flowers at the toe, light-up on the heels, and even have Anna and Elsa on the inside. They are perfect for any little Frozen fan who has a winter-themed party or just wants to dress up as a princess. The lightly-gripped sole is apparently (according to Asda) perfect for dancing in so this could be the perfect Christmas party gift! Better yet, the shoes are priced at just £14 (around $18) so are an inexpensive present.

Based on the online sales, it appears that Frozen 2 merchandise is going to be just as popular as Frozen merchandise was when the original movie was released this holiday season!

Disney has really begun to ramp up the Frozen launch outside of just merchandise with the announced Disneyland Paris Frozen Celebration running between January 11th and May 3rd.

Of course, for now, over in Walt Disney World you can get your Frozen fix from both the Frozen Ever After attraction and beginning soon during Mickey’s Very Merry Christmas Party, Anna and Elsa will light-up Cinderella’s Castle during the A Frozen Holiday Wish stage show.

Are you a fan of these light-up Frozen shoes? Let us know in the comments below!