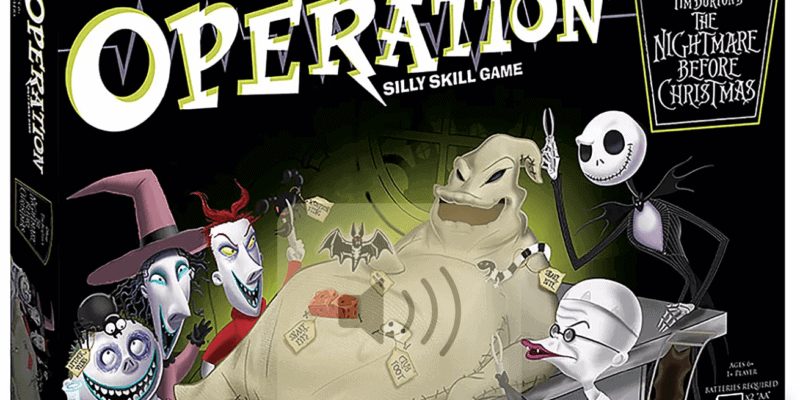 With Halloween just over a month away now, we really can’t get enough of all the “Nightmare Before Christmas” merchandise that Disney is releasing this year, especially the incredible Vans collection hitting stores early next month. It’s still an amazing time to be a fan of the movie and pleasantly surprising to see Disney continue to release new merchandise for a movie which people often forget, is now over 25 years old!

Disney is jumping onto one of the most famous board games of all time, Operation, for a special “Nightmare Before Christmas” edition of the game.

Better yet, instead of the normal suspects like Jack and Sally taking center stage, this time it’s everybody’s favorite villain, Oogie Boogie, who has the role of the patient in the game. Check out the game in all it’s glory below:

This themed Operation game features sound and light-up features. Naturally, given that Oogie Boogie isn’t a human, the parts with the game are slightly different to a normal Operation board game. The game comes with twelve custom removal parts including snake, spider, worms, bones, scorpion, bat, bug, and a needle and thread.

You can purchase the Nightmare Before Christmas Operation board game directly from shopDisney for just $29.95! The game can be played with two players or one so there’s no excuse not to pick this up in time for Halloween!

If you are a fan of the Nightmare Before Christmas remember that you can meet Jack and Sally in various Disney parks at the moment as part of the Halloween festivities at the parks!

Are you going to purchasing this themed edition of Operation? Let us know what you think of it in the comments below!