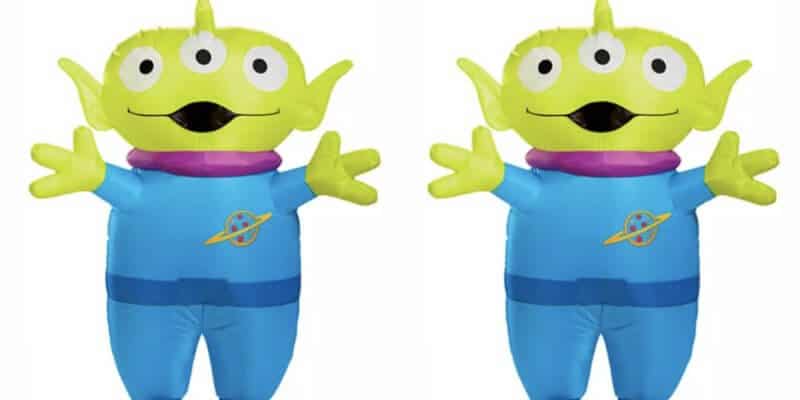 If you love Halloween, you stand between 5’5″ and 6’1″ tall, and you love “Toy Story,” shopDisney is about to take your trick-or-treating to a whole new level.

ShopDisney is featuring inflatable Green Alien Men and Buzz Lightyear costumes perfect for that Halloween party, taking the kids around the neighborhood to go trick-or-treating or even to wear at Mickey’s Not-So-Scary Halloween Party at Magic Kingdom at the Walt Disney World Resort! (Just remember that no costumes are allowed for Guests ages 14 at Disney Parks aside from at Disney’s Halloween parties.)

The Green Alien Man costume features an inflatable jumpsuit with a battery-powered fan inside to keep it inflated.  You’ll pay more than you would for a turn at the Claw Machine–this costume retails for $79.95, and you’ll also need 4 AA batteries. It can be a bit tricky to maneuver through the crowd in the costume, but we think it’s worth it to bring some “Toy Story” fun to the party!

Whether you’re going to infinity and beyond or just staying around the neighborhood to go trick-or-treating, Buzz Lightyear’s Space Ranger costume will set you apart from the rest. Like the Green Alien Men costume, it is also inflatable and includes a fan to keep it aired up. It features a jumpsuit with an attached hood and is best suited for a Toy Story fan who’s between 5’5″ and 6’1″, per shopDisney’s site.

This costume also sells for $79.95 at shopDisney. When suiting up for that Halloween shindig, just remember, you’re not a flying toy and don’t take any dares!

Perhaps the most fun costume in this trio of inflatable Toy Story-inspired get-ups is this one. Rex is a gentle giant, but he’s also a party animal–a Partysaurus Rex, to be exact. And you can party the night away in this elaborate (a nice word for huge) inflatable costume that comes with a jumpsuit, gloves and a fan to keep Rex as monstrous as possible.

The Rex costume retails for more than the Alien and Buzz costumes–$119.95 at shopDisney.com. Rex will need 4 AA batteries for his trusty fan as well.

You can check out the entire “Toy Story”-inspired costume collection on shopDisney here.

Are you dressing up as a Disney character for Halloween this year? We’d love to hear from you! Feel free to include pics of your costume too!