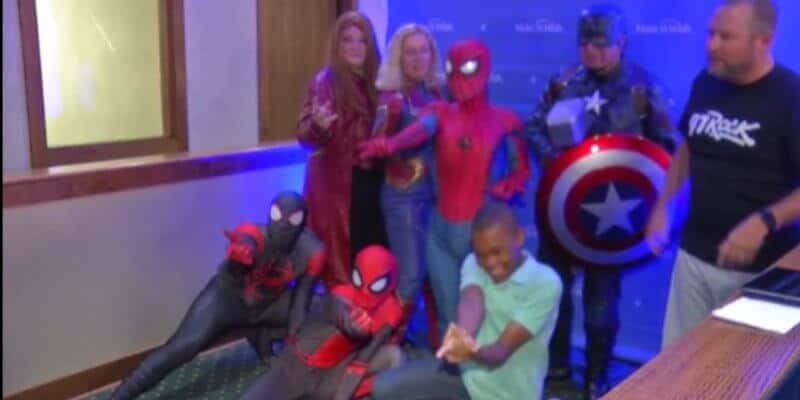 What would you do if your favorite Marvel heroes stopped in for a visit, but that wasn’t their biggest surprise? That’s exactly what happened a few days ago for one young Marvel fan during the Make-A-Wish Radiothon.

Isaiah Pitts was surprised when he got a phone call and an impromptu visit from some of his favorite Marvel superheroes–Spiderman, Captain America, and other friends from the Marvel Universe. He was thrilled to meet them in person, but then they told Isaiah that their visit wasn’t the only surprise!

As part of the Make-A-Wish program in partnership with Disney, Captain America and his team surprised Isaiah by telling him that he was going to Disneyland! Isaiah couldn’t believe it. He didn’t know what to say, so he said, “I’m still speechless.”

When Isaiah was very young, he was diagnosed with a disorder called hemophilia, a condition caused by the lack of a specific gene that tells Isaiah’s blood to clot if he is injured. A slight injury for Isaiah could mean time in the hospital.

And while that might make some people feel bad, it doesn’t seem to have that effect on Isaiah, who says his hemophilia is actually his “superpower,” that he’s not different, and his body just heals in a different way.

Isaiah was so excited about the surprise visit from his Marvel pals, who also brought him a gift box full of comics, toys and other surprises, but the surprise that left him, as he says, “speechless,” was that he’s finally getting to take a trip to a place where even more surprises await him–the Happiest Place on Earth–Disneyland.

Watch Isaiah express his gratitude in the video below:

Have you or someone you love been the recipient of a trip to a Disney Park from the Make-A-Wish Foundation? Let us know in the comments below!