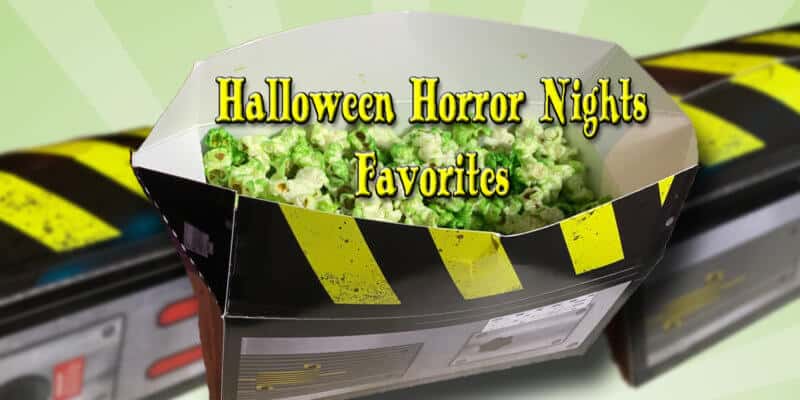 This year’s fiendish, fall, fear-fueled fun at Universal Orlando Resort is filled with haunting delights and a few surprises. While the scare zones and monster mazes make the event a must-see, 5 Halloween Horror Nights favorites stand out for me.

Attention to detail separates Horror Nights from most Halloween events. While each haunted house is filled with props and professional decor, it’s the sometimes-missed macabre magic that adds to this to-die-for adventure. 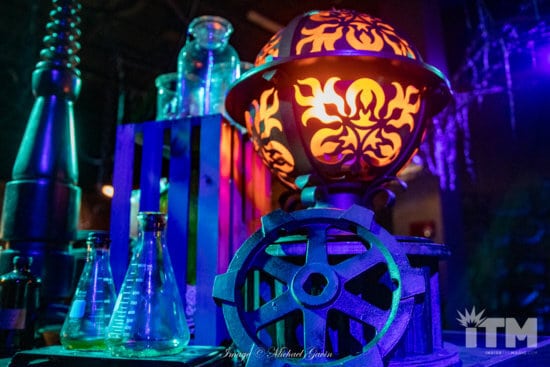 It’s no secret that Halloween is a favorite time of year for me.  Haunted houses, creepy-cool entertainment and exciting events, like Halloween Horror Nights (HHN), ensure a fearsome and fun spooky-boo season.  Topping the list of drop-dead delights, of course, is HHN.  The depth of detail and passion poured into making the event intensely immersive and monstrously memorable is unequaled. 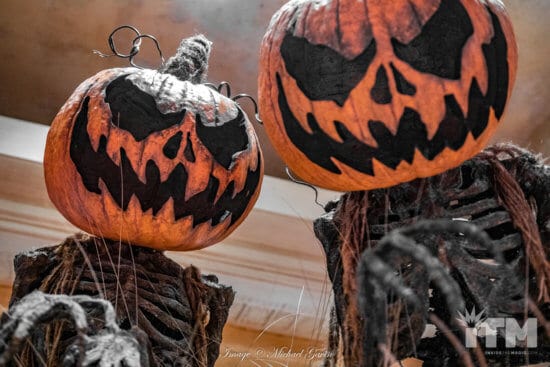 Each year, fortune smiles and several things manage to surprise and amuse.  Listed below are examples of 5 Halloween Horror Nights favorites of this nature from the Orlando event. 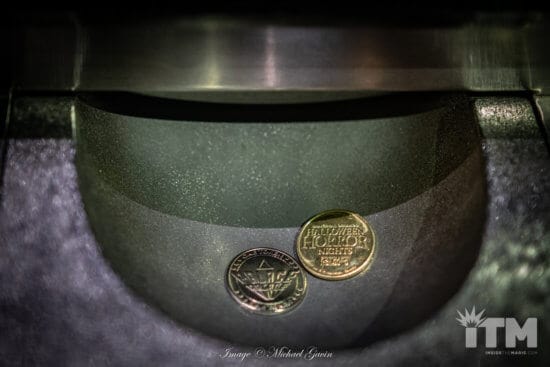 This Rob Zombie themed scare zone not only harbors various vignettes from the namesake album, but there are also a few, fiendishly fun, interactive surprises. Residing in the San Francisco area of Universal Studios Florida, three photo opportunities await those who visit the area during Horror Nights. Fans of the artist should recognize each of them: 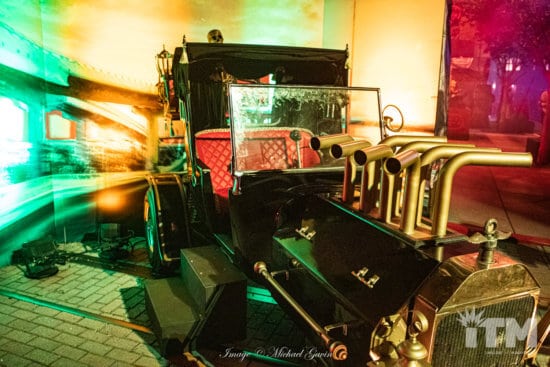 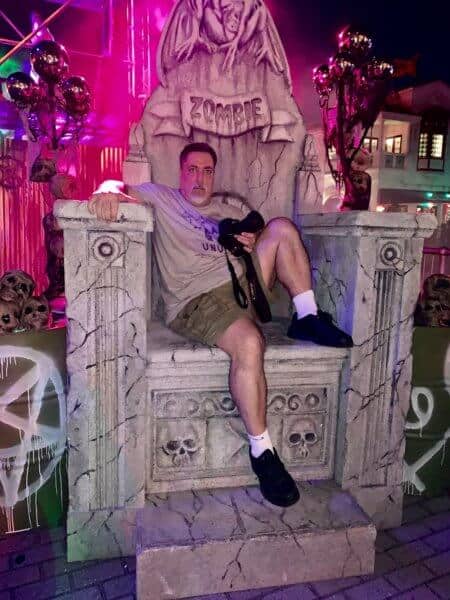 Within the gift shop attached to the Mummy roller coaster, several eighties-style arcade cabinets contain Halloween Horror Nights merchandise. Just beyond these, a cluster of retro arcade games awaits those who want to relive late 20th-century mall game rooms. Several ‘old school’ favorites beg for tokens. These are not any ordinary arcade token – each has a Horror Nights logo. Two styles appear over the course of the event: gold-tone and silver style. Of course, fans will want to save a few of those special HHN game tokens as souvenirs. 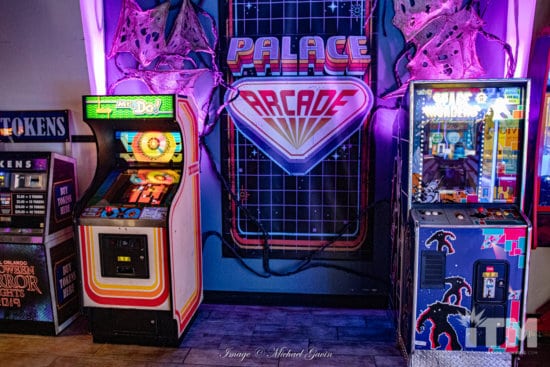 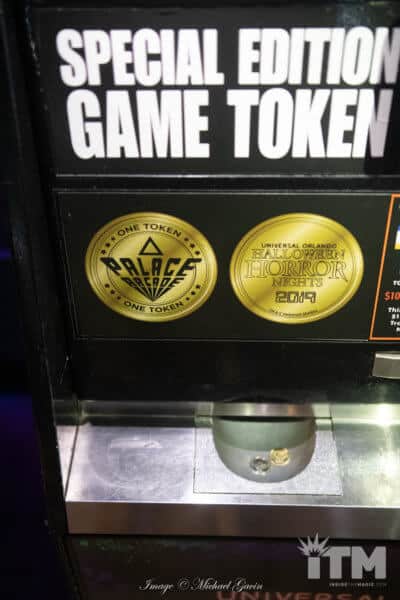 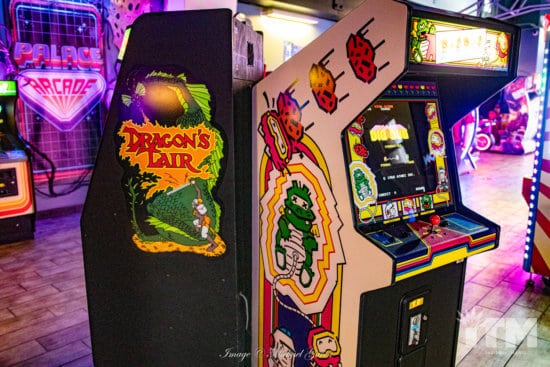 The La Bamba restaurant hosts fear fans enjoying the benefits of a guided RIP Tour of Horror Nights. Each tour includes munchies for those taking part in this add-on feature. To covert the space into a Halloween theme, Universal adds several large photos featuring creatures cleverly crafted by the infamous Pumpkin Rot. For Halloween fans who are not familiar with this legendary haunter’s work, a visit to his website is well worth the time. In addition, several large creatures, inspired by the artist loom over diners as they prepare for their tour. 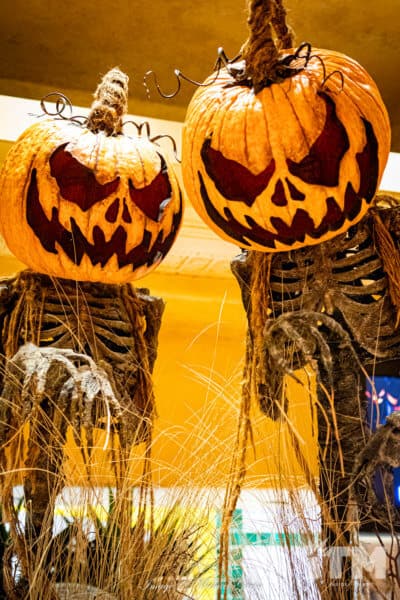 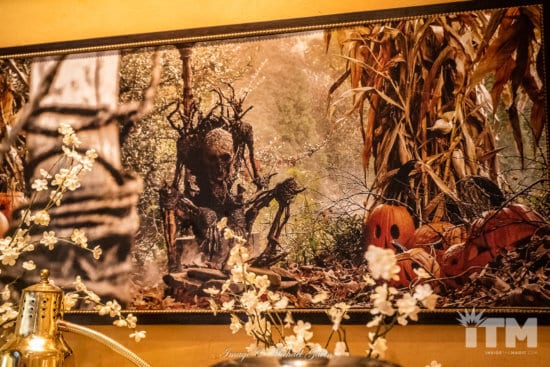 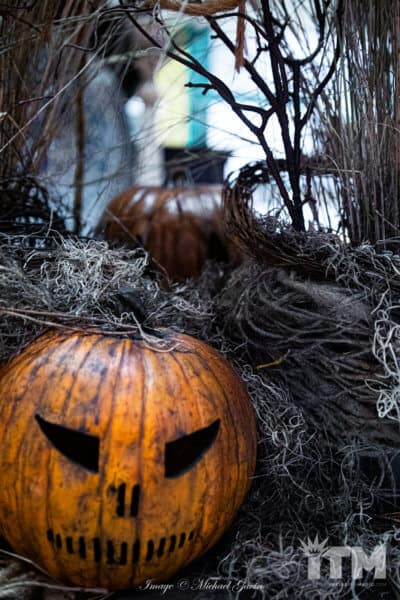 Perhaps the most amusing find, this delicious delight was a complete surprise. While Halloween Horror Nights has its share of treats (candy corn and waffles/syrup beverages, I’m talking about you especially!), this brilliant box of bright green “Slimer” popcorn was totally unexpected. Found at the treat stand just across from the Tribute Store, these munchies make sure bustin’ tastes good. Each box resembles (right down to the exact dimensions) a ghost trap used by the Ghostbusters to capture wayward spirits. 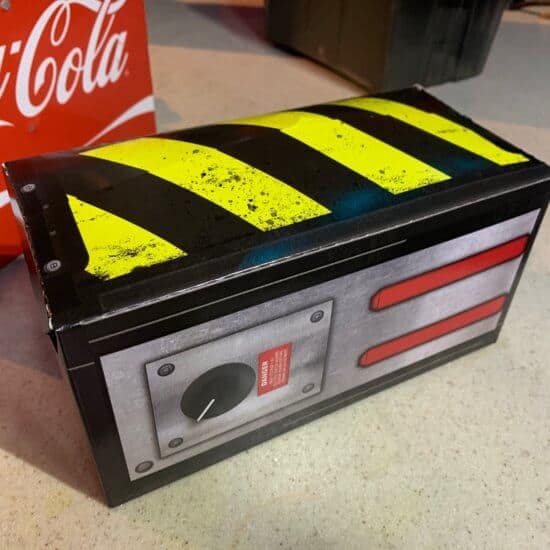 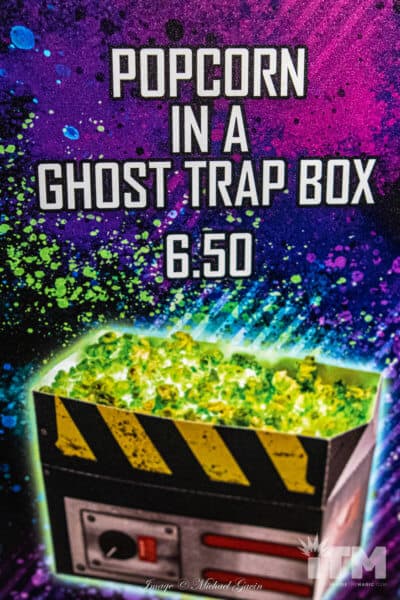 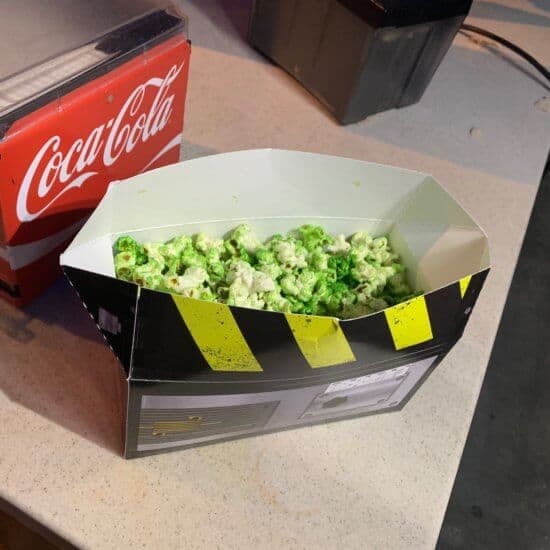 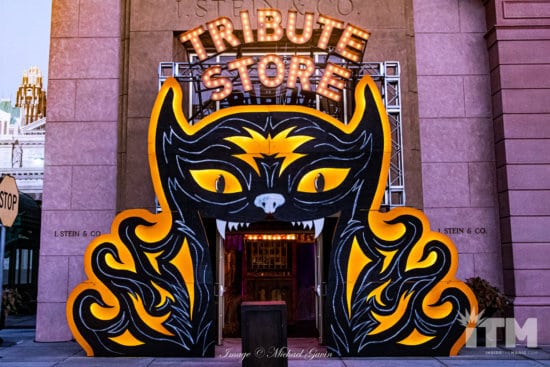 Pay close attention to the items pinned to the bulletin board in back and those hiding behind magnets on the refrigerator. Within this room, there’s even a photo of the New York fire department before it was converted to Ghostbusters HQ. 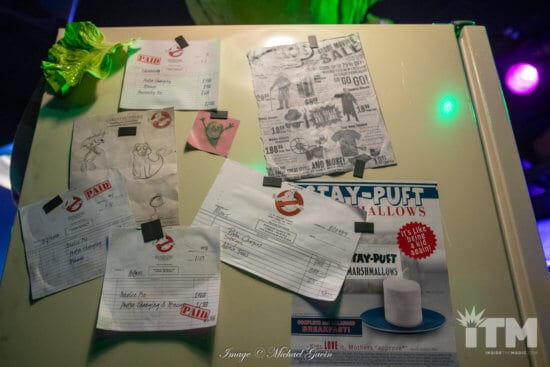 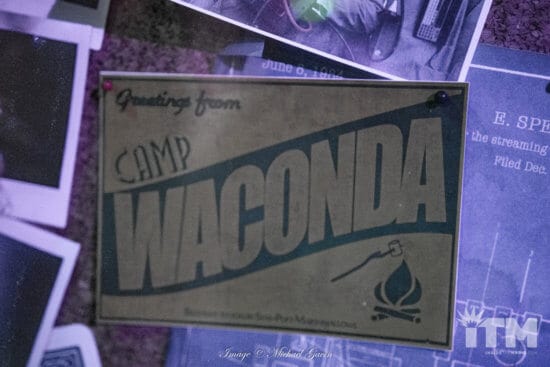 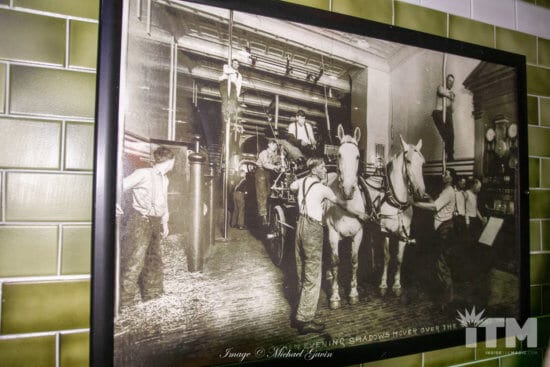 Upon one of the shelves within the Monsters section, a small concrete brick reveals its historical significance. 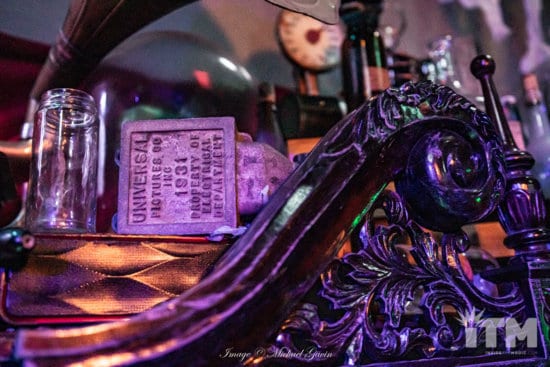 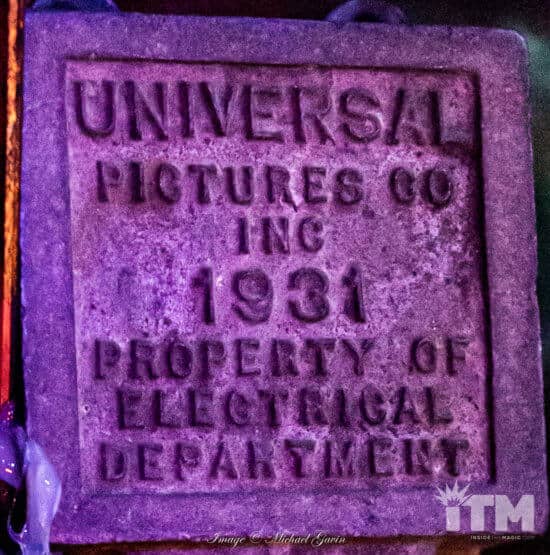 Merlin’s magic makes a not-so-hidden appearance. This bright, metal-wrapped orb once graced a long-gone portion of the Lost Continent at Islands of Adventure. 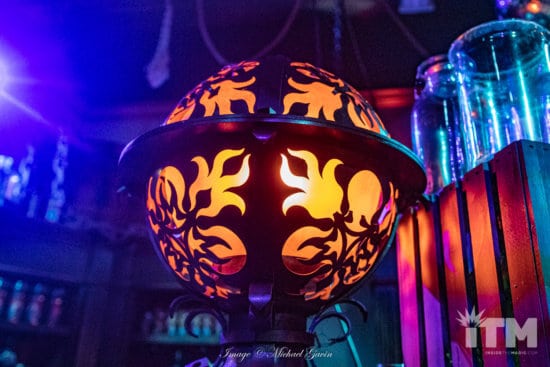 Print on demand tee shirts feature Halloween Horror Nights houses and creatures.  Many have an amusing personalizing element to them. 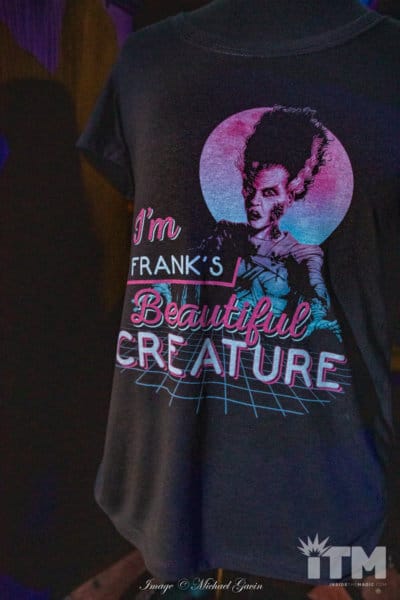 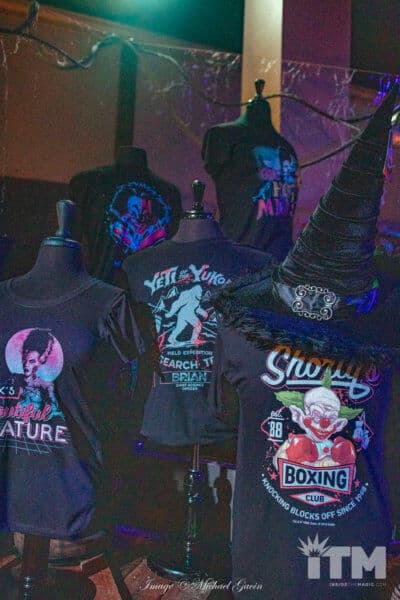 All of these Halloween Horror Nights favorites add to the eerie event’s exciting experience. Each proves the passion that creative teams pour into the annual Halloween celebration. There’s much more to discover for those willing to look around. Of note, and not mentioned above, limited edition art prints (and magnets) by Shelby Denham featuring elements of HHN have been making appearances each week (with a different design) at the Horror Shop, located on Hollywood Boulevard. 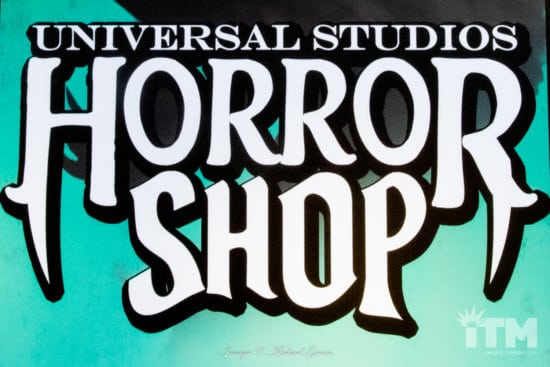 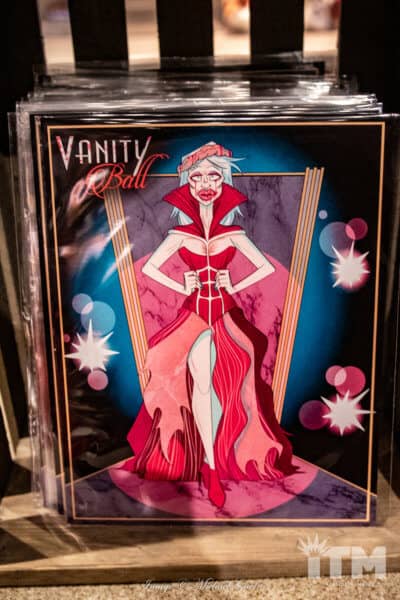 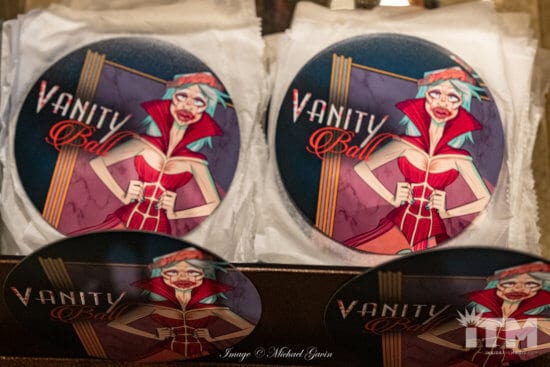 What is your favorite fearsome find at Halloween Horror Nights 2019? Please share your spooky surprise in the comments below.