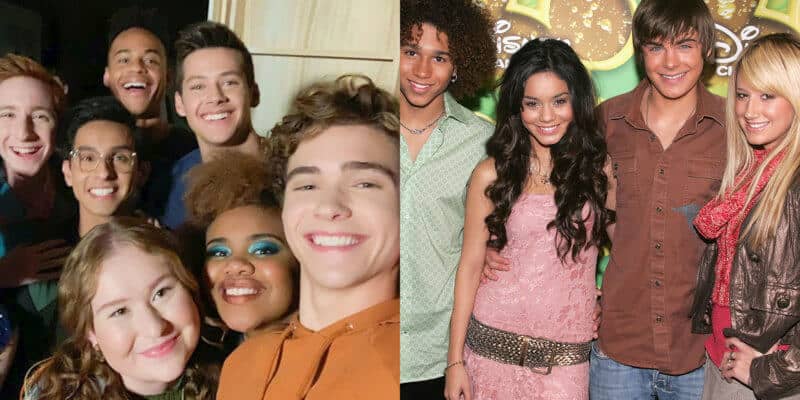 Unless you’ve been living under a rock for this past year, you probably know that Disney’s “High School Musical: The Musical: The Series” is one of the all-new shows coming to Disney+ when it launches later this year. The new series will consist of 10 episodes and will be filmed documentary-style, following a group of East High school students staging a “High School Musical” as their winter theater production. And today, we’ve got an up-close look at the new cast!

Grab a leather jacket, force a curl, slap on that b&w and ur good to go

Disney fans may remember Bassett from his time as Aidan Peters on the popular Disney Channel comedy series named “Stuck in the Middle” in 2018. Now, he plays Ricky, a snarky sweetheart, a B-minus student, and a star. Ricky’s been dating fellow junior Nini for a year. When she unexpectedly breaks up with Ricky, he launches a bold plan to get Nini back — by auditioning to star opposite her in the school’s production of HIGH SCHOOL MUSICAL. Ricky’s class-clowning covers a deep fear that he’s not actually great at anything, except coasting by on charm.

Rodrigo is most known for her work on “Bizaardvark” (2016), “Grace Stirs Up Success” (2015), and “Paved New World.” And now, she plays Nina–the other star of the show! Formerly relegated to the chorus of her school’s musicals, Nini just got back from summer camp, where she found her voice – and confidence — playing the lead in THE MUSIC MAN. Unfortunately, Nini also found a new boyfriend at camp. Fiercely loyal to her two moms, she’s stronger than she first appears: an iron butterfly. Also, she never misses AMERICAN IDOL and THE VOICE (only after doing her homework, natch) and takes hour-long showers to sing Ariana Grande’s entire catalog.

I definitely tried to hit the cart in the back more than anything else…??‍♂️

Cornett is most known by Nickelodeon fans for his guest-starring role as Zach Barnes in “Bella and the Bulldogs.” Now, he plays Nini’s new love interest: E.J., the type of ambitious entrepre-nerd who brings homemade props to auditions. The son of two high-powered corporate attorneys, E.J. is supremely confident but secretly prone to anxiety attacks when anything goes off-plan. A future producer more than an actor, E.J. calls the Steve Jobs biography his “bible” and keeps a copy on his nightstand.

Who has the best bosses in the world? This mama right here!! Thank you, @disneypluz for the sweet Mother’s Day gift—and the dream job! I love all of my children— Luke and his @disney HSM brothers and sisters! ❤️?❤️

Reinders is most known from her time on Broadway, but in this new show, she plays the student’s drama teacher: Miss Jenn, who truly believes musicals can save lives. She’s moved back home to Utah after she left New York under mysterious circumstances, packing up in a hurry. Miss Jenn forces student choreographer Vikram to do a Kickstarter for the musical when the school board won’t give her the $50,000 budget she asks for. She suffers serious imposter syndrome and would ultimately do anything for these kids.

one of my favorite days in SLC so far ???

Lester is most known from her recurring roles on CBS’s hit comedy “Mom”, Netflix’s “Prince of Peoria”, and go90’s “Mr. Student Body President.” Now she plays the brash and gutsy Ashlyn. A slightly woo-woo horoscope reader, Ashlyn is finding her place in the school hierarchy, or trying to (It helps that her cousin E.J. is a senior). Ashlyn worships Sara Bareilles and is an aspiring songwriter on the sly. She can’t wait till she’s old enough to vote, and she’ll march and protest in the meantime. Whether she’s cast in the musical or not, she’s got her eye on the student council.

Just be you! Happy pride month from a colorful background in a pretty cool place ?? . ? @joefini22

You may have seen Saperstein in the past in commercials. And now he plays Ricky’s lifelong wingman: Big Red. As a skate rat, Big Red is the spiritual cousin of both Bill and Ted: always fuzzy, he’s been sleep-deprived since preschool. Big Red is weirdly devastated by Ricky and Nini’s breakup — his surest role is as their wisecracking third wheel. He has secretly crushed on Nini since middle school, and her breakup with Ricky proves a moral best-friend dilemma. He joins the backstage crew to be “Nini-adjacent.” He wants to start a garage band but keeps forgetting to learn an instrument. He’s addicted to true crime podcasts and THE WALKING DEAD, and yet he’s afraid of the dark.

Thanks to my team for making all of this possible! #DreamTeam #fashion #modeling #singing #dancing #performing #actor

Disney fans most know Sofia from her role as Buffy Driscoll on the Disney Channel series “Andi Mack.” Now she plays Gina, a polished pro with an Equity card and the unwavering belief that the drama teacher made a HUGE mistake not casting her as a lead. Gina is an entitled princess, but her ambition pales in comparison with her stage mother’s. Gina worries that she peaked in 6th grade when she starred in a Canadian tour of ANNIE. She posts Instagram videos of her singing that go viral — and makes Nini seriously start to doubt her own talent.

Other stars to be joining the cast that Disney hasn’t revealed many details on include:

Frankie A. Rodriguez as Carlos

If not us, then who? ⁣⁣ If not now, then when?⁣⁣ Our time is limited, so let’s make the most of it ⏳⁣⁣ ⁣⁣ I’m using my time between now and July 1st by writing and completing a draft of my book for aspiring actors. ⁣⁣ ⁣⁣ How’re you using yours? ⏳⁣⁣ ?: @christinascaptures

The series is set to premiere on Disney+ with the debut of the new streaming service on November 12.

What are your thoughts on this new cast of Wildcats? Let us know in the comments below!