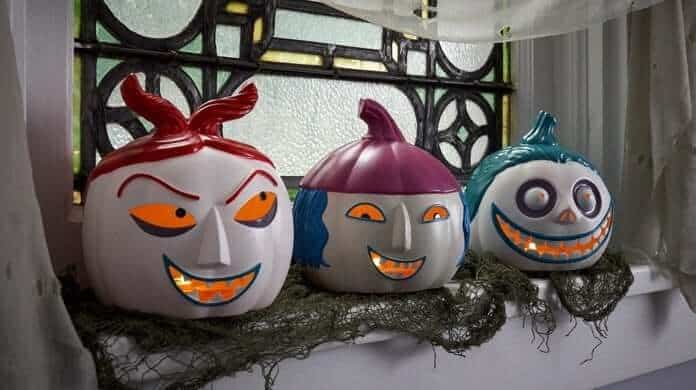 As Halloween continues to evolve, we can’t help but consider changing a tradition as old as time: jack-o’-lanterns. Instead of these heavy and messy pumpkins, why not celebrate Halloween with something even spookier–Lock, Shock, and Barrel from “The Nightmare Before Christmas.”

You may remember Oogie’s Boys as a mischievous trio of trick-or-treaters from Halloween Town that served as Oogie Boogie’s henchmen in the classic film by Tim Burton. Now, the three have returned for more mischief and to help fans celebrate Halloween.

The three light-up pumpkins are officially licensed merchandise and can be purchased separately. Each are 5.75”H x 5.75”W, powered by 3 AAA batteries (not included), and feature a light-up design with each of the boy’s creepy faces.

You may remember Lock as the leader of Oogie’s Boys, and in this pumpkin-design, he certainly leads in the level of fright. The light-up pumpkin features Lock’s devil red locks, eyebrows and signature blue lips.

Not that this group is that smart, but believe it or not–Shock is actually the most intelligent and the most colorful in this group of pumpkins. The light-up pumpkin features Shock’s signature long blue hair and eyes.

Oogie’s Boys have a lot of shortcomings, including Barrel’s height as he is the shortest of the gang. However, he makes up for it in his width and creepy grin, which is perfectly captured on this pumpkin. The light-up pumpkin features Barrel’s short blue hair, his massive smile and dark circled eyes.

Will you be purchasing one of these haunting light-up pumpkins from “The Nightmare Before Christmas”? Let us know in the comments below!