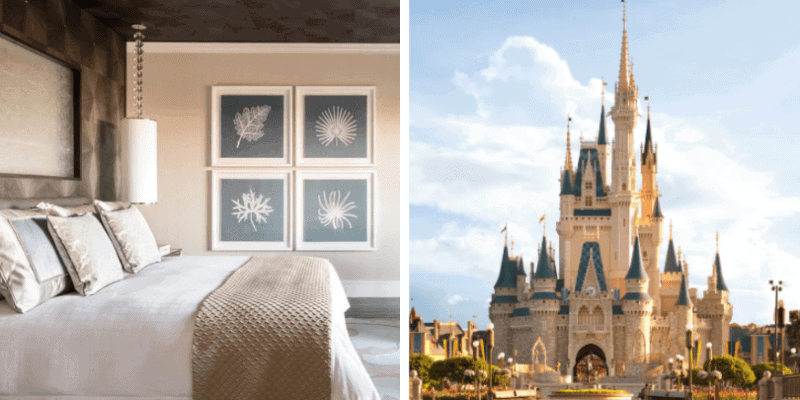 We’re always looking for ways to save money at the Disney Parks, but every so often our curiosity gets the best of us and we want to see just how extravagant a Walt Disney World vacation can be. And after seeing these photos that peek inside Walt Disney World’s most expensive hotel room, we knew we had to share.

More Magic: You Can Now Get Married at Disney World for Only $6,500!

Walt Disney World offers vacations at multiple price points, and the Deluxe Resorts (some of the most expensive hotels on property) can offer rooms at well over $1,000 per night, depending on the time of year you book, the room type, and the view (who wouldn’t want to be able to see the theme parks from their hotel?).

But the most expensive hotel at Walt Disney World isn’t even owned by Disney: it’s the Four Seasons Resort Orlando, and the priciest option is around $70,000 per night.

Yes, you read that right. For the wealthiest Disney fans who want the most luxurious vacation experience, you can spend $70,000 per night to book the entire 16th floor of the Four Seasons Resort Orlando.

That means, as Reader’s Digest notes, you’ll get access to 21 decorated bedrooms and almost as many bathrooms, as well as the rest of the amenities the hotel has to offer, like a five-acre water park with a lazy river, a complimentary kids club, and stunning views of the Disney Parks (complete with nightly fireworks displays, when available). What could be better?

Save Money: Cheapest Way to Book a Disney World Vacation

Of course, the Cinderella Castle Suite is perhaps the most highly coveted place to stay on Disney World property. But most Disney fans don’t have that opportunity — and this hotel offers Guests the royal treatment, too. Good Morning America remarks:

Unless you’re sleeping in Cinderella Castle itself, there may be no suite more royal than the aptly named “Royal Suite” at the Four Seasons Resort Orlando at Walt Disney World.

Okay, so $70,000 per night is pretty steep, even if you invite your entire family on the Walt Disney World trip of a lifetime. So, if you want to stay at the Four Seasons Resort Orlando without paying such a high price, you’re in luck. The hotel offers some great deals all throughout the year, including an amazing summer vacation offer, so there are ways you can save a little bit of money if you want to stay at this luxurious hotel without the highest price tag. And you’ll still get access to all the amenities of the Four Seasons (minus the extravagant 16th floor suites). You can view all the current offers available at the Four Seasons Resort Orlando here.

Related: What Perks Are Left for On-Property Guests at Disney World?

The Four Seasons Resort Orlando is one of the fanciest hotels on Disney property, but it is also one of the most magical. It provides vacationers with a relaxing, upscale environment and an escape from the hustle and bustle of the theme parks while also offering an experience like no other.

Nestled in a secluded, residential setting within WALT DISNEY WORLD® Resort, our AAA Five Diamond Resort is a lakeside haven dotted with gardens, pools and towering pillars of palms and cypress. Tee off at the exclusive Four Seasons Golf and Sports Club Orlando, splash around with the kids at Explorer Island, treat yourself to a soothing, post-park massage at The Spa, or toast the evening fireworks with dinner at our rooftop steakhouse Capa.

It is also considered to be an official Disney World hotel, meaning that those staying at the Four Seasons Resort Orlando have almost all of the same benefits as those Guests who are staying at a hotel owned and operated by Disney. Read all about the experiences this Disney World hotel has to offer here.

You can click here to book your trip with our friends at Academy Travel.

Have you ever stayed in one of Walt Disney World’s luxurious hotels like the Four Seasons? Let us know in the comments!

Want to book a vacation at the Four Seasons Resort Orlando or some other amazing Walt Disney World Resort hotels? Check out Academy Travel, a team of knowledgeable Authorized Disney Vacation Planners who can plan every detail of your Disney vacation, from booking your hotel and theme park tickets to making dining and FastPass+ reservations and even offering expert tips and tricks to make your trip magical and memorable. Click here for a no-obligation quote!