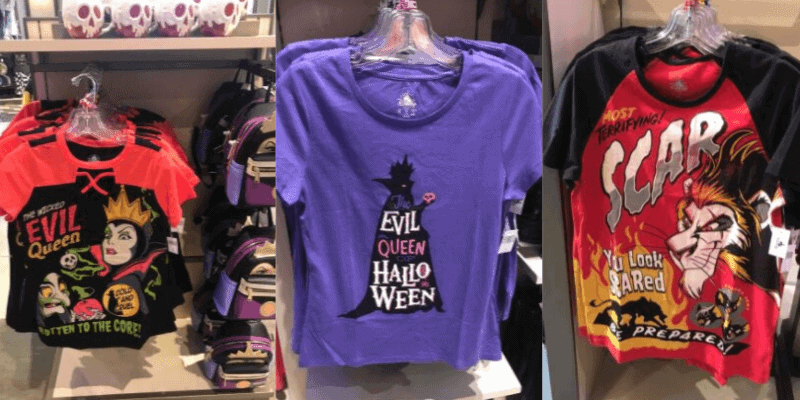 We can’t get enough of the pre-Halloween season here at Inside the Magic! With the 50th anniversary of the Haunted Mansion at Disneyland, the pumpkin decorations going up at Magic Kingdom, and all of the amazing new merchandise like themed ears and backpacks, it’s already feeling like fall and Halloween at the Disney Parks.

World of Disney just launched two new lines of Disney Villains merchandise, and we think these are some of the most delightfully sinister shirts yet.

The second line of shirts is comic book-style, and we think these are so unique and fun. In addition to Cruella, the Queen, and Hook, you can also find Scar added to the list of Villains featured on this merchandise line. How awesome is that?

You can find all of these amazing new Villains shirts and so much more merchandise at World of Disney at Downtown Disney at Disneyland and Disney Springs at Walt Disney World! We’re sure they will become available at other merchandise locations throughout the theme parks on both coasts, but like so many other Disney fans, our go-to store is always World of Disney.

Want to pick up these shirts and other fun Halloween merchandise on your next Disney trip? Why not plan a vacation with an Authorized Disney Vacation Planner! Click here for a free quote from Academy Travel, the Authorized Disney Vacation Planners who can book your Disney vacation so you can pick up this fun and spooky Disney Villains apparel and rock it in the parks all Halloween long.

Which of these spooky t-shirts will you be picking up on your next Disney trip? let us know in the comments!