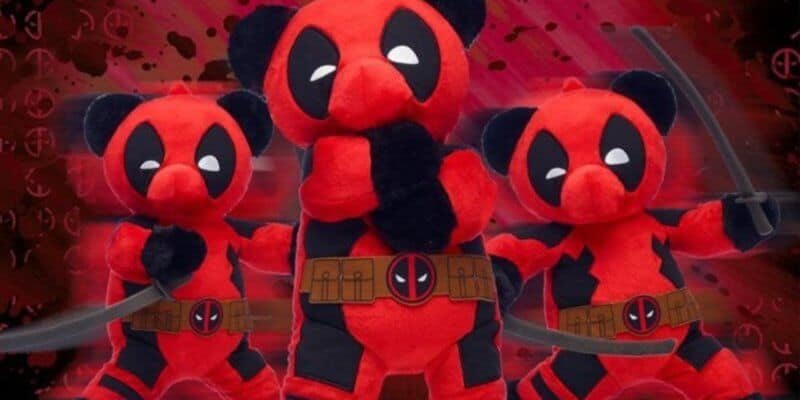 Deadpool may be one of the most gory and wild Marvel characters of all time, but that doesn’t mean he can’t be represented in the form of an innocent child’s play toy. Well, at least…Build-A-Bear doesn’t think so with their all new Deadpool Bear.

Yes–you read that right, Build-A-Bear has just debuted a new Deadpool bear. The bear is exclusive to the company’s website as it cannot be found in stores. The adorable and somewhat vicious bear is a collector’s item and comes with a plush sword accessory set that can attach to his back or wrists.

In addition to the standard Merc with a Mouth bear, he can also be purchased in a number of different gift sets with exclusive accessories. Below is a look at the hilarious and surprisingly cute sets.

Get ready to saddle up with this comedic gift set that gives the beloved character in an old western spin. The set features cowboy boots, a belt, and a hat and is perfect for a visit to the saloon or a ride on your trusty steed along the great pastures.

We all know Deadpool can be a little crazy and out of the ordinary, but that’s what makes the character so great! Celebrate this part of the infamous hero with this bunny set, which features bunny ears, a plush mobile phone, backpack, and drink whistle.

No one is more athletic than Deadpool, making him the ultimate Skater! The set includes a toy skateboard and a fun mask.

What better way to tell that special someone you love them than by presenting them with this adorable version of the vicious assassin with roses. The gift set features the character holding his own plush rose bouquet.

Even professional killers like to pamper themselves from time to time, which is exactly what this stuffed Deadpool is in the mood for in this getup. The set features the bear wearing a plush robe with bunny slippers.

What better way to tell someone they’re the one than with this fourth-wall breaking hero? The bear comes posed to pop the question with a ring in hand.

Deadpool can be quite busy killing bad guys. However, he’s never too busy to dabble in the arts. The gift set includes the character wearing his own ballerina dance outfit.

What are your thoughts on these hilarious Deadpool gift sets? Let us know in the comments below!

Be sure to visit Build-A-Bear’s website to get your own.