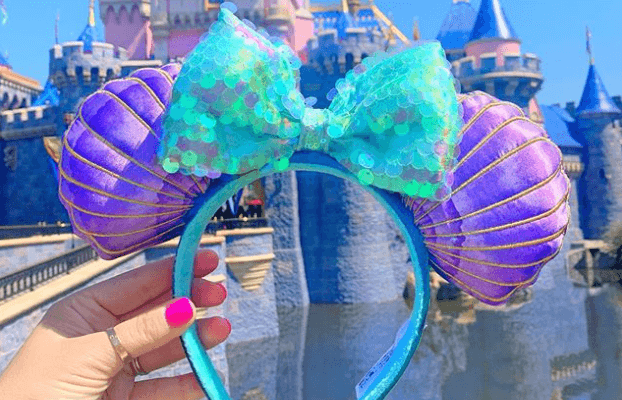 We thought our Disney ear collection was complete…until we saw these new ears inspired by “The Little Mermaid”! It’s perfect timing seeing these all-new ears inspired by Ariel herself with this year being the 30th anniversary of the animated classic (and with the live-action remake in the works). We can’t get enough gadgets and gizmos themed to “The Little Mermaid,” and if you’re anything like us you’ll be rushing to Disneyland to pick these up as soon as possible.

Look at these ears, aren’t they neat? The all-new Ariel-inspired Minnie Mouse ears have a different charm than the rest of the ears available at Disney Parks these days. That’s because the ears are actually purple seashells made to look just like the ones Ariel wears. The iridescent sequin bow is so beautiful, it almost looks as though it’s made of the same scales as Ariel’s mermaid tail. The sides of the headband are even embroidered with adorable little mermaid details, including Ariel’s silhouette on one side and the saying “Mermaid hair don’t care” on the other. Overall, these ears are too cute to pass up (especially if you’re a fan of “The Little Mermaid)!

We can’t get over all of the adorable new Minnie Mouse ears hitting merchandise locations at the theme parks lately. From Imagination Pink and Magic Mirror Metallic to the Jasmine-inspired ears that released earlier this year, there are plenty of headbands to choose from that can take your Disney Parks outfit to the next level. We love accessorizing with Minnie Mouse ears, and we know so many other Disney fans do, too!

Wouldn’t you think my collections complete? ????‍♀️⁣ •⁣ We thought we were done collecting Disney ears, until these Little Mermaid Ears dropped @disneyland today and we just HAD to have them!!! ????‍♀️⁣ .⁣ .⁣ .⁣ #disneyland #disneystyle #disneylifestylers #disney #thelittlemarmaid #happiestplace

You can pick up these new “The Little Mermaid”-inspired Minnie ears at select merchandise locations at Disneyland Resort for $27.99. The ears are not yet available online or at Walt Disney World, but we will update you as soon as we find out more.

Which of the all-new Minnie Mouse ear headbands is your favorite lately? Let us know in the comments!