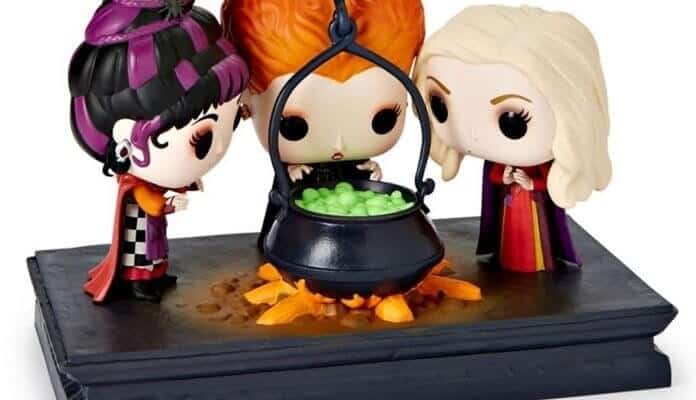 Funko is known for their wildly sought after collectible Pops–but lookout! The company just premiered a freakish and frightly addition that we think diehard “Hocus Pocus” fans are gonna go out of their minds for–a Hocus Pocus Sanderson Sisters Movie Moment Pop!

Last year, the company released a special 25th anniversary edition Pop! of the infamous sisters, which spread like wildfire! And this year, the company is returning with another edition featuring the treacherous trio huddled around a ghoulish cauldron with a bubbling green potion sitting over a firing flame and we’re obsessed.

The Funko, which is currently only available for pre-order, will be priced at $36.99 with shipping and is expected “on or before” September 4. Currently, Spirit Halloween has an exclusive to the first wave of available Pops.

The Pop!, pictured above, is officially licensed and is a single item standing at 5.5″ tall and 8.5″ wide.

You can pre-order this pop here.

Last year’s Pops, which were released almost exactly a year ago from today, featured the three sisters standing on their own and were also exclusive to Spirit Halloween. Each could be purchased for $12.99 or in a set together for $36.99.

For a cheaper version of this pop, click here.

Standing at a massive 5.5″ tall, 10.5″ wide and 13.25″ long, this massive figure is almost the size of the actual Millennium Falcon from the “Star Wars” films. Found only on Amazon, the Pop! is now available exclusively for Prime members for $64.99. If you’re not already an Amazon Prime member, be sure to sign up for the free 30-day trial so you can get one.

Will you be pre-ordering this all-new Sanderson Sisters Movie Moment Funko Pop!? Let us know in the comments below!