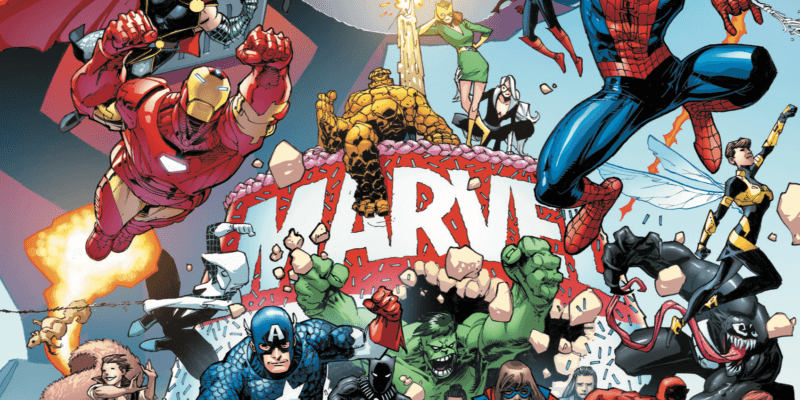 Marvel Comics opened the doors to the Marvel Universe for the first time ever on August 31, 1939. Creating a tapestry of Super Heroes and stories that have gone on to shape pop culture for generations of fans around the world. Marvel which is celebrating its 80th Anniversary this year on August 31, has released an all-new commemorative piece of art by comic book legend Adam Kubert.

For 80 years, Marvel has reflected the world outside your window, inspiring millions of fans with iconic characters and timeless stories that brought the Marvel Universe to us. And what better way to celebrate Marvel’s historic 80th Anniversary all year long with your favorite Marvel comics, games, shows, collectibles, fashion, and more. Marvel’s beloved comics and characters have been a part of our lives for as long as we can remember and it all started with the Human Torch.

Marvel will be celebrating its birthday with a week of festivities and events at various retailers and Marvel exhibitions and experiences, including the historic debut of Marvel Comics #1000.

As a massive, oversized, special edition book, Marvel Comics #1000 will feature the greatest array of luminaries from both classic and current comic books and beyond, revealing a long-kept secret and some startling discoveries along the way.

Comic shops who are participating will be hosting Marvel birthday party events and will have a brand-new edition of the Marvel Universe Magazine available free to customers. This magazine will feature exclusive art and behind-the-scenes content for some of Marvel’s top comic releases in the fall, so make sure to pick this up along with Marvel Comics #1000.

In addition to comic shops, stores around the country including Disney store, Amazon, Box Lunch, and FYE will be hosting Marvel birthday celebrations with new and exclusive merchandise, special offers, giveaways and more.  More details will be revealed in the coming weeks.

Are you excited for Marvel’s 80th Anniversary? Will you be picking up Marvel Comics #1000? Let us know in the comments!