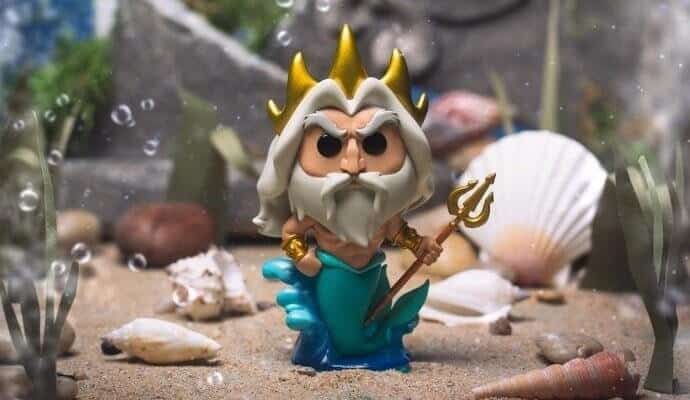 Get ready to dive under the sea with King Triton from Disney’s “The Little Mermaid” as Funko Pop! has just released an all-new figure that we’re losing our seashells over.

Hot Topic just recently opened orders for this item, which is exclusive to the outlet. The special item comes in celebration of the 30th anniversary of the beloved film. The #570 Disney “The Little Mermaid” 30th Anniversary King Triton Pop! figure stands at 6-inches tall and is available for $22.90 while supplies last.

The figure is almost a perfect replica of the original character from the film as it features the king’s mighty mermaid tail, his golden trident in hand, golden cuffs, and his brilliant and bright golden crown, signifying his rule over Atlantica.

In the official description of the item, Hot Topic writes:

“Make a splash in your Funko collection and celebrate 30 years of Disney’s The Little Mermaid! King Triton, the ruler of Atlantica and of course, the father of 7 mermaids including Ariel, has received the Funko treatment as a vinyl figure. He has his gold trident in hand, ready to do whatever it takes to protect his family and kingdom.”

To get your own King Triton Funko Pop!, be sure to purchase it here.

And if this new aquatic Pop! doesn’t fulfill your Funko fix, be sure to check out one of the company’s other recent releases–a Star Wars Millennium Falcon with Han Solo!

Standing at a massive 5.5″ tall, 10.5″ wide and 13.25″ long, this massive figure is almost the size of the actual Millennium Falcon from the “Star Wars” films. Found only on Amazon, the Pop! is now available exclusively for pre-order for Prime members for $64.99.

If you’re not already an Amazon Prime member, be sure to sign up for the free 30-day trial so you can get one. To pre-order this other-worldly Funko figure, click here.

Will you be purchasing this all-new King Triton Funko Pop!? Let us know in the comments below!

Comments Off on Dive under the sea with this new King Triton Funko Pop!